The Takfiri Daesh [Arabic acronym for "ISIS" / "ISIL"] claimed responsibility for the attack in Bagdad's Sadr City area that martyred at least 32 people. 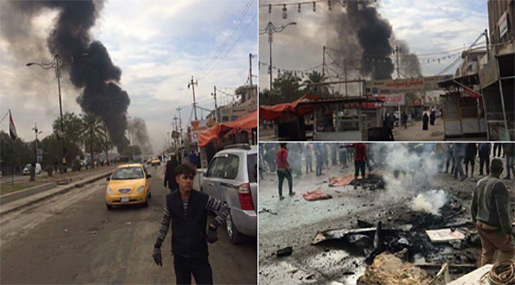 However, local al-Sumaraya TV channel reported that the number of casualties in the attack is at least 20.

At least 61 were wounded in the attack on the outskirts of Baghdad, Sadr City district, AFP reported.

A car bomb exploded in the 55 square in a quarter, which is predominantly populated by Shiite Muslims. Many buildings located near the site of the explosion had been damaged.

The blasts occurred while French president Francois Hollande was in Baghdad on a visit to meet with Prime Minister Haider Abadi and President Fuad Masum.

Three bomb blasts had martyred 29 people across Baghdad on Saturday while an attack near the city of Najaf claimed the lives of seven policemen on Sunday. Daesh claimed responsibility for both assaults.

Gruesome violence had plagued parts of Iraq ever since Daesh terrorists mounted an offensive and took control of portions of the Iraqi territory more than two years ago.

Data from monthly reports issued by the United Nations Assistance Mission for Iraq [UNAMI] showed that acts of terrorism had martyred a total of 12,038 Iraqis and injured 14,411 others in 2016.