Developments during 2016 may prove to be the heaviest burden on Saudi Arabia in the kingdom's history, stemming largely from the losses it suffered on multiple fronts. The losses incurred by Riyadh in Yemen, top the list. For the last 21 months, Riyadh has been striving to achieve a victory on the battlefield but to no avail. 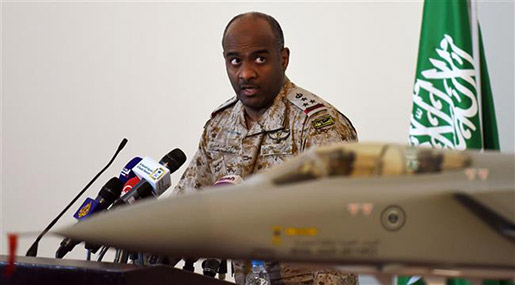 More than 20 months since the outbreak of the Saudi war on Yemen in March 2015, the outcome falls in line with the initial predictions. The war has extended into a record timeframe, during which a wide variety of military strategies and weapons have been employed but failed to achieve any of the stated objectives. This, despite the political cover and support provided by the United States and Britain, which the "Arab coalition" led by Riyadh has enjoyed for more than 600 days of war.

The reasons and justifications for the western support are varied and numerous. These include Saudi Arabia's astronomical military spending and arms deals as well as its keenness to maintain the political partisanship -regionally and internationally- of a strategic area - Yemen. The country has more than one critical strategic location, most notably the Bab el-Mandeb Strait.
Who is fighting the war?

The richest country in the world- a Kingdom that owns the second largest oil reserves at the very least- is fighting this war. Saudi Arabia used its financial boom in the last couple of years to stockpile an arsenal of the latest Western military equipment in general and American in particular. Not only did it purchase fighter jets, tanks and warships, but Riyadh also bought entire countries such as Sudan. Saudi Arabia resorted to the most effective means of enticement and intimidation as it dragged an "Arab alliance" into the conflict. However, the only real member left in that alliance is the United Arab Emirates [UAE], which sticks to the US-line in its coverage of the battle politically, logistically, and in terms of supplying military hardware.

That is how Saudi Arabia went to war with its southern neighbour, supported by powerful elements and a good reason for a possible triumph. It might be unprecedented for the side that is on the offensive to posses all of the above. The general assumption was that the Kingdom was facing-off with a country whose defeat was imminent. The assumption quickly dissipated as the Saudis struggled in Yemen. The kingdom found itself unable to achieve its main objectives which were: to reinstate President Abd Rabbu Mansour Hadi in Sana'a, disarm the "Ansarullah" movement, destroy the [Yemeni] army's missile force, and impose a federal system by force. However, the war became a greater burden for Saudi Arabia when it spilled over onto the Kingdom's territory with rockets and Yemeni incursions. The war also bled the Saudi economy in light of the sharp decline in oil prices.

Weeks after the start of the clashes in southern Yemen, "Ansarullah" and Yemen's armed forces decided to withdraw from most of the fronts there. This was not done due to military pressure as portrayed by the pro-Saudi media, but rather because of the political calculations related to the situation in the south and the decision to prevent a deepening rift with a former ally [the southern movement]. Therefore, Yemen's military and the popular committees did not hold onto the fronts in the southern and eastern provinces, as was the case in Taiz.

For months now, the battles have been confined to nearly six fronts: Taiz, Marib, Jawf, Sana'a, Saada, and Hajjah. Forces loyal to Saudi Arabia are seeking to make breakthroughs along those fronts, especially the coastal ones in Taiz, in an attempt to keep the army and the popular committees away from Bab el-Mandeb and the Red Sea. Deeper inland along the Nehm front the aim is to get to Sana'a, while along the border fronts in Al Baq the Saudis are looking to hit "Ansarullah" in its main stronghold of Saada. Such goals are proving near impossible with each passing day for various reasons. Firstly, the geography and the popular incubator in critical areas of Taiz work in favour of the Yemeni military and the popular committees.

Secondly, the mountainous highlands surrounding the area of Nehm is slowing down the advance of the forces loyal to the "Alliance" that has failed to garner the support of the "tribal belt," which it was betting on to take down Sana'a. The third is Saada where the scene is most comical. Saudi forces along the northern edges of the border cannot advance behind enemy lines. At the same time, they are unable to repel the attacks of "Ansarullah" and its allies deep inside the Kingdom -in Asir, Najran, and Jizan. That is why Riyadh utilizes Salafist and Jihadist fighters to advance towards Saada through Al Baq. However, according to field source, the mines the Yemenis planted as well as the gas cylinders and water pipes they stuffed with dynamite killed scores of militants.

The Battle of the Frontier

But the cruellest dilemma for Riyadh and its Western backers lies deep in Saudi Arabia. The barefoot fighters [metaphorically speaking] established a balance understood by Riyadh, whereby the Saudis are no longer solely on the offensive, threatening to impose strategic changes and occupy and divide cities. For example, threats to destroy a city in Yemen are now countered by the occupation of Saudi villages or even entire cities such as Najran, which the Saudis can only enter following a political decision [on the part of the Yemenis].

The human losses draining the Saudi forces on a daily basis are accompanied by the moral losses that have affected the prestige of the army and made it a source of ridicule among the Yemenis. Many might think that a large number of the expensive "Abrams" tanks, the pride of the American industry, were destroyed with "Cornet" missiles and other anti-tank weapons in Asir, Najran, and Jizan. But the fact is that most of these tanks, along with western-made armoured vehicles, were destroyed by the Yemenis using cheap cigarette lighters, after being abandoned by the Saudi troops who fled the battlefields.

The Battle of Politics and Economy

As part of the adjacent political battle, the Saudi regime refuses to acknowledge - to this day - that the other side is not a handful of officers and militias who are seeking the spoils of war and power. It is a revolutionary movement backed by the people and the army. It has made the final and definitive decision for the independence from Saudi guardianship that has ruled Yemen for decades. This is what made the Yemenis accept the price of the confrontation, whatever the price, and reject the unfair compromises designed to give Saudi Arabia what it failed to secure on the battlefield.

The formation of the "National Salvation" government in Sana'a served as clear evidence of the aforementioned path. On the other hand, Saudi Arabia has been "dependent" on the US administration since the moment Washington declared the war [the words of Adel al-Jubeir, the US ambassador at the time]. Riyadh is still in a state of suspense over the policies of the incoming US administration, led by president-elect, Donald Trump.

In addition to Yemen's strengths, Riyadh has practically failed to impose any variables enabling it to force the Yemenis to the negotiating table. Its efforts to federalize the country by force have proven to be a long shot, given the deepening rifts among its allies, the absence of a popular tributary to the project, and the lack of necessary objective ingredients. The efforts by the Kingdom and its allies to sectarianize the battle collided with a solid Yemeni resolve, intractable to tribalism and blind support.

Economically and after failing politically and militarily, Saudi Arabia is betting on a Yemeni refraction through starvation and impoverishment. Moving the central bank to Aden was done to this end. The move deprived the vast majority of Yemenis from their salaries. The air, sea, and land blockade was another step toward the same aim. Yet according to Yemeni sources, both steps will not bear fruit - at least in the medium term- since Yemen has been familiar with poverty and the absence of a real economic infrastructure for years. It has also been accustomed to finding alternatives enabling it to withstand the toughest conditions [After all, the great and rich countries experienced starvation during wars. The minister of supply in Winston Churchill's government was able to overcome the crisis in Britain during World War II with a few simple plans.]

On the other hand, Saudi figures reveal the losses incurred by the Kingdom's economy due to the war in Yemen. They were clearly reflected on in its 2016-2017 budget, and they affected the economic and social infrastructure as a whole.

It is true that Riyadh's deficit is caused by other reasons notably the low oil prices, but the unlimited military spending with figures "astronomically" amounting to tens of billions of dollars, took a toll on the regime's treasury. The Saudi government recently acknowledged, in the words of its Minister of Energy Khaled Al-Faleh, that the spending is unlimited.

Apart from the popular support the Shi'ite revolutionary forces in Yemen enjoy as well as the steadfastness of the Yemeni people, the leadership at the military front is characterized by three main components: the capabilities of the Yemeni army and the combat skills of the "Ansarullah" movement, the experience gained over nearly two years of fighting, and the logistical support and continuous training by friends. These components should make Saudi Arabia realize that its blockade would not work.

In this context, a regional source describes to "Al Akhbar" the "surprising" Yemeni military experience, revealing a major development that took place during the past two years. The Yemenis - with the help of their friends - filled the gaps, addressed the weaknesses, and accumulated power during the war as well as restored and developed the military system, which is usually done by armies in time of peace.

Another security source stresses that the issue of self-development when it comes to Yemen's military capabilities has become a serious and an actual dossier. The dossier is already on its way to implementation and is likely to be activated unexpectedly. But that does not mean, according to the source, that Saudi Arabia and the United States have succeeded or will succeed in stabilizing the siege on Yemen, or that the blockade cut-off the supply lines of armaments and training the Yemenis may need.