Responding to reports that the Obama administration wants to slap Russia with new sanctions for allegedly interfering in the 2016 election, President-elect Donald Trump said the US needs to "get on with our lives," as "nobody knows exactly what's going on." 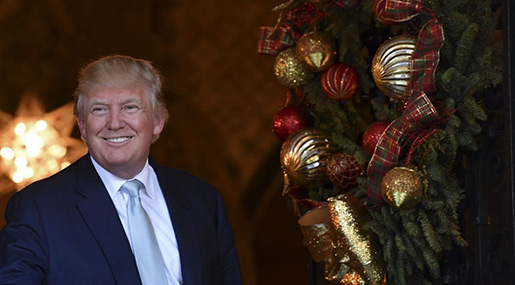 Donald Trump once again contested allegations put forth by the US intelligence community claiming that Russia orchestrated hack attacks to disrupt the Democratic Party's activities.

On Wednesday, Republican Senator Lindsey Graham [R-South Carolina] said during a trip to Latvia's capital, Riga, that Moscow should expect new sanctions for allegedly interfering in the 2016 election.

Asked by reporters if imposing the sanctions would make any sense, Trump replied: "I think we ought to get on with our lives. I think that computers have complicated lives very greatly. The whole age of computer has made it where nobody knows exactly what's going on."

Though Trump said he wasn't familiar with Graham's remarks, he did note: "We have speed. We have a lot of other things, but I'm not sure you have the kind of security that you need. But I have not spoken with the senators and I certainly will be over a period of time."

Moscow hopes that the new sanctions may be lifted by the incoming Trump administration, the Russian Foreign Ministry's special envoy Andrey Krutskikh said on Thursday.

The diplomat added that, given Trump's promise to reverse up to 70 percent of Obama's executive orders, "the latest restrictions that hamper our cooperation are very likely to be part of those 70 percent," as cited by RIA Novosti.

His statement comes amid media reports that the incoming administration may take steps towards mending Washington and Moscow's badly bruised relationship. According to German magazine Bild, Trump is looking to lift sanctions on Russia, as has been recommended by American political heavyweight Henry Kissinger recommendations.

The article adds that Kissinger, who was secretary of state and national security advisor during the Nixon administration, has "clear ideas" about the future relations of the two nuclear superpowers.

The outgoing Obama administration and the Democratic camp maintain that ‘Russian hack attacks' were instrumental in undermining popular support for Hillary Clinton and paving the way to Trump's victory. Earlier in December, Barack Obama threatened Russia with covert and public payback, which he said would be carried out in a "thoughtful, methodical way" and could come at any time.

On Wednesday, Secretary of State John Kerry confirmed Obama's intention, saying the outgoing president reserves "the right to respond to Russia at the place and time and manner of his choosing... Believe me, it will be his choosing."

For his part, Trump dismissed the bizarre allegations that Moscow tried to interfere in the 2016 US presidential elections as "conspiracy theory."

The claims that Russia was behind the DNC hack have also been disputed by CIA and NSA veterans, who wrote in mid-December that "harder evidence of a technical nature points to an inside leak, not hacking - by Russians or anyone else."

The group called Veteran Intelligence Professionals for Sanity stressed in a memo that "given what we know of NSA's existing capabilities, it beggars belief that NSA would be unable to identify anyone - Russian or not - attempting to interfere in a US election by hacking."

It said the emails contained in the Democratic Party servers "were, in fact, not hacked," but leaked to WikiLeaks and other sites that subsequently published them. In turn, WikiLeaks urged Obama to "submit any Putin documents" to them so they can "be authenticated to our standards if he wants them to be seen as credible."