A New York developer and leading supporter of Donald Trump, is at the center of outcry after he said he hoped Barack Obama died of mad cow disease that the First Lady moved to Africa and lived in a cave with gorillas. 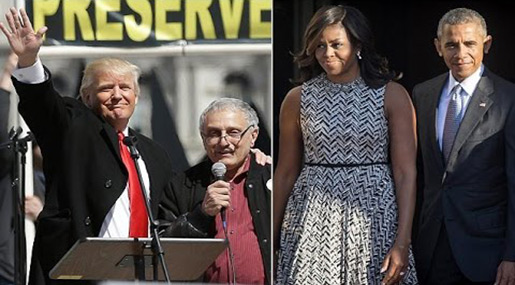 Carl Paladino, the co-chairman of Trump's New York campaign, defended his comments that appeared in a free weekly newspaper published in Buffalo. Artvoice asked several leading figures from the city for their hopes for 2017.

"Obama catches mad cow disease... He dies before his trial and is buried in a cow pasture next to Valerie Jarrett," said Paladino, who failed in an attempt to become New York governor.

He added that he would like to see Michelle Obama "return to being a male and let loose in the outback of Zimbabwe where she lives comfortably in a cave with Maxie, the gorilla".

There was rapid and widespread criticism of the comments.
Erie County Executive Mark Poloncarz said the remarks were "incredulous".

"If they were made by him there can be no room in our civil discourse for such hate and anger," he said.

This is not the first time Paladino has been at the center of controversy.

During his 2010 run for governor, which he lost to current Governor .Andrew Cuomo, emails that he had forwarded mocking Michelle Obama, were leaked. On Friday, Cuomo was among those to accuse Paladino of racism.

Earlier this year, Paladino said that Trump supporters were people frustrated with government and who "want the raccoons out of the basement". He defended that comment amidst claims it was racist.

Paladino, a Buffalo developer who is chairman of the Ellicott Development Co, had reportedly been among those visitors to Trump Tower in New York, apparently in search of a position with the incoming administration.

The Times Union newspaper said that on Friday afternoon, Paladino defended his comments in a lengthy statement.

"Michelle hated America before her husband won. She then enjoyed all the attention, the multi -million dollar vacations, the huge staff and other benefits," he said.

He went on to say, "Then when Hillary lost, she and Barack realized that without Hillary, there was no one to protect the little, if any, legacy he had. That's when Michelle came out and said there is no hope for America. Good, let her leave and go someplace she will be happy."