More than 5,000 US forces stationed in Iraq are embedding with other coalition fighters on the frontlines, where Daesh [Arabic acronym for "ISIS" / "ISIL"] had been taking control of major cities like Mosul. 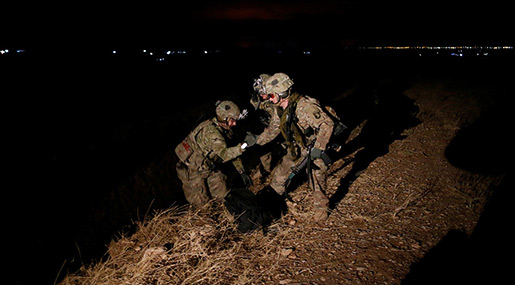 "We have always had opportunities to work side-by-side, but we have never been embedded to this degree," US Army Colonel Brett G. Sylvia told Reuters.

As of August 2016, over 25 nations make up the coalition forces in Operation Inherent Resolve, but the vast majority of the troops still come from the US. Together these nations had attacked Daesh in Iraq and neighboring Syria since 2014.

"It's a team effort," Marine Captain Lou Murillo, who has been on the ground in Iraq, told NPR reporters. "If we have intelligence, we'll talk with them and make sure that we are both included on the approval process for it. And then we will send a request up to our higher headquarters, and they process the targets from there."

The coalition had been moving troops to Mosul, where Human Rights Watch reports that terrorists had been "indiscriminately or deliberately killing and wounding people for refusing to be human shields."

The US army had been deploying more troops to support the Iraqi security forces [ISF], in a role supposedly limited to "training, advising, and assisting."

Along with American troops, several thousand Iraqi federal police had been relocated from the southern outskirts to reinforce the eastern front. Together, the coalition is the largest force in Iraq since the initial US invasion of Iraq in 2003.

When asked if US troops in Iraq are engaging in combat with the coalition forces, Army Colonel Steve Warren told reporters they are only there to "simply shoot back if somebody shoots at them. They won't kind of go off and conduct any type of mission on their own."

However, according to the Pentagon, as a part of Operation Inherent Resolve to intervene against Daesh, the US had conducted 13,058 strikes, including 7,248 in Iraq and 5,810 in Syria, while the rest of the coalition forces had conducted 3,748 strikes, with 3,430 in Iraq and 318 in Syria.

As the White House transitions, War Secretary Ash Carter suggested that the prospect of sending even more troops to Iraq seems likely, even if Daesh is defeated. "We'll need to continue to counter foreign fighters trying to escape and ‘ISIL's' attempts to relocate or reinvent itself. To do so, not only the United States but our coalition must endure and remain engaged militarily," Carter said to Fox News.