Written off by the West, Syria's President Bashar al-Assad has defied all expectations of his downfall, thanks to his iron will but also his crucial alliances with Russia and Iran. 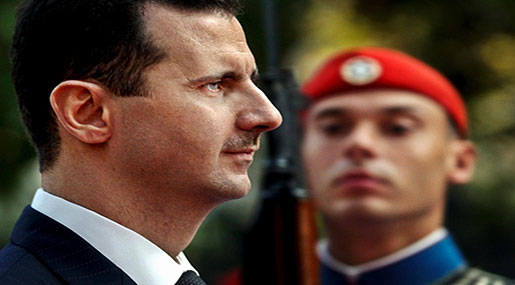 Syria's army declared Thursday it has recaptured all of Aleppo, allowing the 51-year-old president to deal a potentially knock-out blow to the opposition forces that rose up against him in 2011.

"The liberation of Aleppo is not only a victory for Syria but also for those who really contribute to the fight against terrorism, notably Russia and Iran," state news agency SANA quoted Assad as saying before the army announcement.

For nearly six years, Assad has been able to count on loyal armed forces, his powerful intelligence services and the support of many people in Syria terrified by the rise of terrorist forces such as the Daesh.

His opponents, meanwhile, have often been deeply divided and disorganized, and received timid backing from Western and Arab Gulf allies unwilling to stand by their side militarily.

Assad, analysts said, was able to survive because he never wavered in his deep belief that he had no choice but to fight on.

"It has always been a struggle for life and death. There was no question of stopping this war. It was either win or lose," said Nikolaos van Dam, a former Dutch ambassador and Syria expert.
"The regime has half a century of experience of how to stay in power. It has the support of the army and security services," he said.

Still, despite some tentative efforts to provide arms and training to opposition forces, the revolution's backers never cracked al-Assad's conviction that he was going to win the war, analysts said.

"Al-Assad advisers maintained from the beginning that they were confident of success so long as the United States Air Force did not bomb Damascus or get involved in the war," said Joshua Landis, director of the Center for Middle East Studies at the University of Oklahoma.

Even at the regime's worst moment, when his forces were driven in March 2015 from Idlib province, "Assad and his advisers brushed off their defeats as limited," Landis said.

"They always projected a strong sense of self-assurance in their ultimate victory."

Patience was vital, analysts said, with Assad, willing to hold out for as long as it took to put down the rebellion.

"He was from the same school as his father, and this school has always understood the importance of time, how to turn bad headwinds into good," said Waddah Abed Rabbo, editor-in-chief of Syria's influential al-Watan daily newspaper.

Still, the key to his victory, Abed Rabbo and others said, was the steadfast support Assad was able to count on from his foreign allies.

"He never doubted his victory because he knew that his country had for decades nourished a solid strategic alliance with Russia, Iran and others," he said.
Those alliances date back decades.

"Syria's relations with its allies are old and founded on... interests that are still valid today," said Souhail Belhadj, a political scientist at the Geneva-based Institute of International and Development Studies.

"The Syrian regime has always shown itself to be a loyal military, strategic, political, ideological and economical for as long as this alliance has lasted."

"The weakness of Assad's enemies has to a great extent been determined by insufficient support of the 'friends' of the Syrian opposition," van Dam said.

Emboldened by his win in Aleppo, Assad now has little reason to make any concessions to the opposition.

"He will rule much as he has in the past, using a combination of intimidation and patronage," Landis said. "We have seen that the Assads are unable to change the fundamental nature of the regime."