More specialist UK soldiers had arrived in Iraq to train anti-Daesh [Arabic acronym for "ISIS" / "ISIL"] forces to fight in Syria, joining the 500 already deployed to the region. 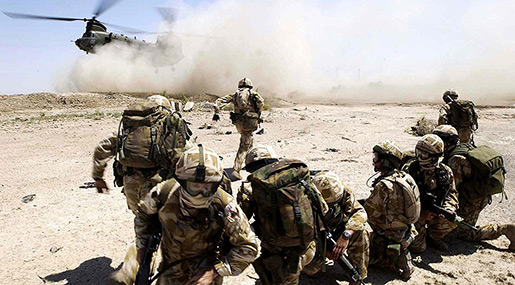 Their arrival was announced as the UK hosts a conference of defense ministers from countries involved in the coalition fighting Daesh.

The 20 trainers - who are likely to be Special Forces soldiers - will teach so-called ‘moderate' militant infantry skills, combat first aid and other battlefield tactics.

The existing deployment is thought to be made up of around 500 soldiers from the 4 Rifles infantry regiment, which is based near the Kurdish-held city of Erbil alongside specialist soldiers from the Royal Engineers and Royal Signals.

Defense Secretary Michael Fallon had previously stated that anyone receiving UK training would be vetted to ensure that no knowledge was passed on to Takfiri groups.

The deployment of UK Special Forces had come under increasing scrutiny, with critics claiming that it has now become the basic form of UK military operations and as such should be brought under democratic oversight.

The UK is one of the few countries which flatly refuses to comment on covert military activities to either the media or to questions by elected lawmakers in parliament.

Calls for a new war powers act have been backed by Labor leader Jeremy Corbyn, among others, who made his case to the Middle East Eye website in August.

"I'm very concerned about this because [former Prime Minister] David Cameron - I imagine [Prime Minister] Theresa May would say the same - would say parliamentary convention requires a parliamentary mandate to deploy British troops. Except, and they've all used the ‘except,' when Special Forces are involved," Corbyn said.

His comments were immediately attacked by former soldier-turned-Tory MP Bob Stewart, who told the Times that the PM must have the opportunity to deploy troops "when they think it's crucial."