Daesh [Arabic acronym for "ISIS" / "ISIL"] militants who took Palmyra might have seized weapons and air defense equipment that could threaten the US-led coalition, its commanding general said, adding he expected Russia and Syria to deal with the "embarrassing" loss. 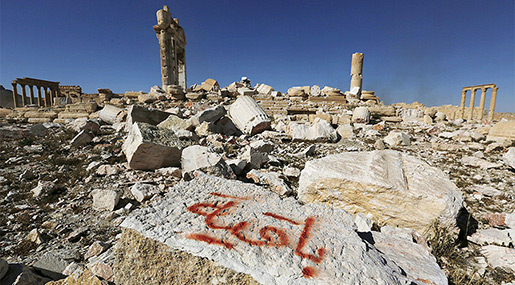 Several thousand Daesh militants launched an all-out assault on Palmyra - and the nearby modern city of Tadmur - over the weekend, overwhelming the Syrian garrison by Sunday. Most of the civilian population had been evacuated, according to the governor of Homs Province. However, some of the defenders' military hardware might have fallen into the terrorists' hands.

Asked to clarify what kind of weapons the terrorists had, the senior military officer in the US-led coalition against Daesh declined to elaborate, pointing out that he said they "might" have seized some. "I don't care to characterize the size, type, or number - any of that."

"Basically, anything they seize poses a threat to the coalition," Townsend said adding that the US will strike them in case Russia and Syria didn't.

"This is the response to what's happening in Aleppo, the advancement of the Syrian Arab Army, and they wanted to make this... or let's say, to undermine the victory in Aleppo," Assad told RT.

"We liberated Palmyra before, we will liberate it once again. This is war, sometimes you win and sometimes you lose," Assad told Rossiya 24 television on Wednesday.

Last week, US President Barack Obama waived a ban on shipping weapons into Syria to arm "foreign forces, irregular forces, groups or individuals engaged in supporting or facilitating ongoing US military operations." The Pentagon also announced another 200 US troops will be sent into Syria, raising the number of US forces operating in the country to 500.

Gen. Townsend explained the troops were needed to "train additional Syrian partners" to prepare the advance on Raqqa, the city in eastern Syria that Daesh had declared its capital. Referring to that operation as "the biggest and most complex thing" the US has undertaken in Syria to date, Townsend said that more forces were needed to overcome the expected Daesh resistance.

No US advisers are working with the Turkish troops or their "partner forces" in northern Syria, which are advancing on the Daesh-occupied city of al-Bab, but Townsend did not exclude the cooperation resuming at some point in the future.

Al-Bab lies south of the 20-kilometer buffer zone that Turkey initially said it wanted to establish when it launched Operation Euphrates Shield at the end of August. Taking it would advance the Turkish objective of separating the Kurdish-held territory in Afrin from the US-backed Kurds in Manbij and Kobani.

"I don't see that as a great concern for us," Townsend said, adding that al-Bab being under Daesh control is enough of a reason for the Turks or anyone else to take the city, a strategically important buffer between Aleppo and Raqqa.