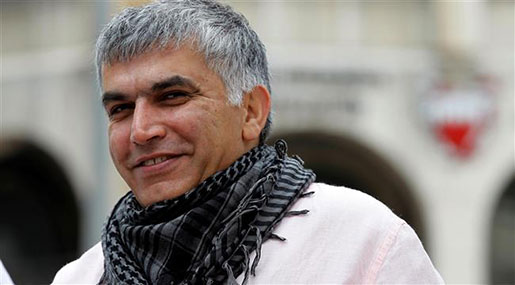 More than 20 MPs from the Conservatives, Labour, the Scottish National party, the Democratic Unionist party, the Liberal Democrats, the Greens and the SDLP sent a letter to the Foreign Office on Wednesday, voicing concern over detention of the activist in the tiny Persian Gulf country.

Rajab, who has criticized the Saudi aggression against impoverished Yemen, could face up to 15 years in prison once he attends the court on Friday.

"We urge you, in advance of the trial tomorrow, to make it clear to Bahraini officials that the United Kingdom wishes to see his unconditional release from prison, and for the charges brought against him, which are related to his right to freedom of expression and freedom of speech, to be dropped," read the letter.

According to the SNP's Margaret Ferrier, who coordinated the letter, "This is a matter of freedom of speech and expression. Nabeel Rajab is highly regarded as a prominent human rights activist, and these charges are little more than an attempt by Bahraini authorities to silence a dissenting voice."

During a conference in Rome last week, Johnson himself blasted the Riyadh regime over its "proxy wars" in the Middle East and its unprovoked military aggression against Yemen.

UK Prime Minister Theresa May's spokeswoman immediately rebuked the remarks, saying they did not reflect "the government's views on Saudi and its role in the region."

The director of advocacy at the Bahrain Institute for Rights and Democracy, Sayed Ahmed Alwadaei, said, "We have seen how Theresa May lashed Boris Johnson over his comments on Saudi.

Nabeel Rajab criticized Saudi Arabia and Bahrain over their bombardment in Yemen and is facing prison for it... If May or her government fail to publicly call for his release, Bahrain will take it as a green light for their repression."

Yemen has been under incessant bombardment of Saudi Arabia and its allies since March 2015.

According to the war-ravaged country's new Prime Minister Abdulaziz bin Habtoor, Britain is guilty of war crimes over its "cluster bombs" sale to Saudi Arabia.

Meanwhile in Bahrain, thousands of anti-regime protesters have held numerous demonstrations on an almost daily basis ever since a popular uprising began in the kingdom on February 14, 2011.

They are demanding that the al-Khalifah dynasty relinquish power and a just system representing all Bahrainis be established.