Boris Johnson refused to apologize for publicly criticizing Saudi Arabia, despite being called into 10 Downing Street by Theresa May for tense talks and being warned that his views do not represent government policy. 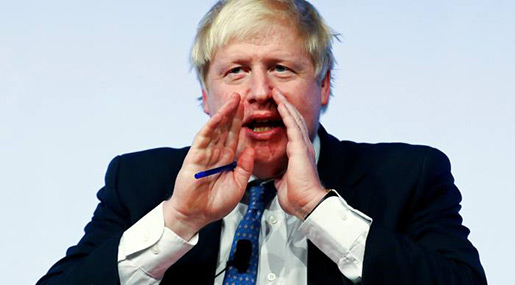 The foreign secretary travelled to Bahrain on Friday to give a speech on British policy in the Middle East, still fuming at the way May had allegedly undermined his authority by publicly rebuking him.

May's spokeswoman said Johnson was only giving his private views that Saudi Arabia was fighting "proxy wars" in the region and "puppeteering", adding: "They are not the government's position on Saudi Arabia and its role in the region."

The prime minister called Johnson in for talks about his comments, ahead of the foreign secretary's trip to Bahrain and a planned visit to Saudi Arabia on Saturday, but government insiders insisted he was "not summoned for a dressing down".

Johnson speech at a regional conference in the Bahraini capital Manama focused on Britain's commitment to stay involved in the Middle East; his aides said he would not repeat his criticisms of Saudi Arabia, nor apologize for them

Johnson believes Downing Street's robust rejection of his comments - widely reported as another "slapping down" of the foreign secretary by the prime minister - is part of a wider attempt by May and her team to undermine him.

The foreign secretary's allies believe May regards Johnson as a political rival and that she had repeatedly tried to belittle him with jokes at his expense and public dressing downs.

Johnson told the prime minister he had privately made the same criticisms to his counterparts in Saudi Arabia and that his view that Riyadh should stop waging proxy wars would have come as no surprise.

May's team insists that Downing Street had no choice but to point out that r Johnson's criticisms of Saudi Arabia were not government policy. "The idea she is out to get him is patently not the case," said one supporter of the prime minister.

The prime minister made a number of quips about Johnson, including joking at a political awards night that she might decide to "put down" the foreign secretary like a dog when she no longer had any use for him. May subsequently checked with Johnson to make sure she had not caused offence.

However, the foreign secretary had now indicated that if he continues to be the butt of jokes then it could undermine not just him but his office.

Although May's team insists she did not strike any deals during the Conservative party leadership contest, it has been suggested that she offered Johnson an important cabinet post as a reward for him standing aside.

But Johnson and Liam Fox, the international trade secretary, have both incurred criticism from Number 10 in recent months, undermining their position as flag bearers for a "clean break" Brexit strategy.

Johnson's team insists that May recognizes that the foreign secretary is "a different kind of politician" and that he is an asset in the job because of his appealing personality, not because of his ability to stick to a government script.

But Sir Malcolm Rifkind, a former Conservative foreign secretary, told the BBC that if Johnson did not like Britain's policy of supporting Saudi Arabia he should make that case in private, not make statements "completely at variance" with official policy.

"He might end up being more comfortable in another senior cabinet position," Sir Malcolm said.

Johnson was expected to visit Saudi Arabia this weekend as planned, even if the visit involved a detour from Bahrain to Paris for possible talks with western allies about the situation in the Syrian city of Aleppo.