The Syrian Army continues to advance on militant-held districts of Aleppo. At the current pace, the besieged city is likely to be liberated by the end of the year, without new agreements on Syria between Russia and the United States. 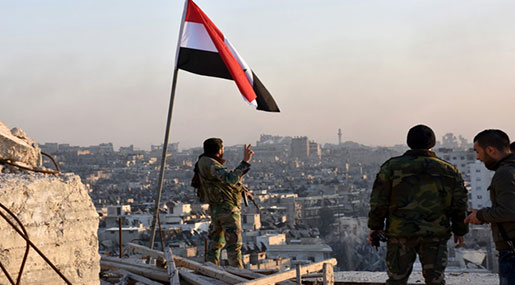 According to the report, the army liberated four districts in northeastern Aleppo from terrorists and "restored security and stability" there. In particular, the Syrian military took control over the district of al-Sakhour, thus dividing the militant-held neighborhoods in two separate parts.

The Russian Defense Ministry reported Monday that the Syrian Army had liberated 40 percent of eastern Aleppo from terrorists.

"Syrian government troops continue liberating the northern part of eastern Aleppo from militants. Forty percent of the eastern part of the city has been freed from terrorists," the Russian Center for Syrian reconciliation said.

The army also gained control over 12 districts in eastern Aleppo, according to the center.

On Tuesday, a military source told RIA Novosti that the Syrian Army regained control over the entire northeastern part of Aleppo.

Thus, we can say that the northeastern part of Aleppo is completely under the control of the Syrian army," the source said.

The Syrian Army encircled areas held by extremist groups in Aleppo in late July, launching a major operation aimed at freeing the city in September. The recent advances by the army are part of a large-scale operation to finally destroy the terrorist stronghold in eastern Aleppo.

Over the recent months, Aleppo has been a major battleground in Syria, engaging government forces, terrorists, and numerous opposition groups.

Eastern Aleppo is held by militants, encircled by government forces, and the fighting has affected thousands of civilians still trapped in the city.

According to UN estimates, between 200,000 and 300,000 civilians are held by terrorists in the city's eastern part.