Why did the Turkish President Recep Tayyip Erdogan send his messengers to the Iranian capital? What prompted him to contact Russian President Vladimir Putin twice in two days? The answers can be curtailed into two words: Al Bab City. 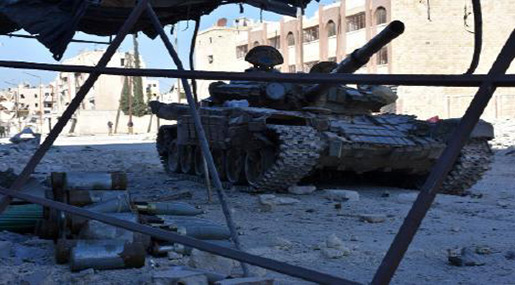 While the United States is preoccupied with the transfer of power from the era of Barack Obama to the era of Donald Trump, regional and international powers are trying to get directly involved in the Syrian war in the hope of changing the reality on the ground and forcing the new US administration to deal with them.

Russia has already delayed the deployment of the Syrian army towards Al Bab (in the eastern Aleppo), waiting for more suitable conditions on the international stage. These conditions have become available after the US presidential elections. In the last month prior to the elections, Russia along with its allies in Damascus and Tehran gathered the necessary power cards to regain control of Aleppo's eastern neighborhoods. It is true that Russia did it in reverse, as it froze its air operations in "Syria's northern capital", but it has supplied its allies with what they need. At the top of the list it provided a major deterrent that protects Syria from a NATO intervention.

In parallel, a reserve strategy was adopted for Syria, in the form of military aircraft stationed at the Russian Hmeimim Air Base and an aircraft carrier in the Eastern Mediterranean, which are yet to take a serious battle role. But their presence is taken into account by the decision-makers of the anti-Damascus states. Their use is possible when needed. Those recourses will undoubtedly serve as a great support base for ground troops, which repelled attacks by militants on the western neighborhoods of Aleppo, making great progress in the eastern part of the city.

Alongside Russia, Iran wants to establish a "fence" that isolates northern Syria from Turkish influence. Iran is present on the battlefield, both militarily and in an advisory role, making up part of the security umbrella. It draws red lines against direct intervention against the Syrian army. And then there is Damascus.

Its agenda has been announced: liberating the Syrian territories from terrorist groups, whatever it takes. On the other hand, Turkey entered the fray in the hope of imposing its demands on the ground to be used in any future political negotiations. The Turks are also looking to secure relevance on the battlefield for the groups Ankara bred, trained and delivered American and Gulf support to in northern Syria. Topping Ankara's priorities is to prevent the establishment of a Kurdish border belt.

All these agendas came to a head at the Syrian city of Al Bab. Ankara did not need permission to send Syrian militants, backed by its own forces, to the northern Aleppo countryside [August 24] under the pretext of fighting Daesh and to prevent the Kurds from establishing their state. But it coordinated its move with the Russians and the Iranians to avoid a confrontation. Turkey openly stated that its intervention would not be directed against the Syrian army. Its troops reached the borders of Al Bab city and stopped. It previously tried to keep the Syrian army occupied and strategically modify the demarcation lines by sending opposition forces to invade the city of Aleppo. When the attacks failed, the UN envoy Staffan de Mistura presented his project for the establishment of a local administration in the eastern neighborhoods of Aleppo to try to devote a divisional fait accompli for Syria: a local administration in Aleppo, an autonomous Kurdish administration in the east, and in the future a local administration in Idlib and a Turkish administration directly linking Erdogan's forces with his armed Syrian battalions.

Syria refused de Mistura's offer, and the Syrian army and its allies launched a battle to liberate the eastern neighborhoods of the city. The offensive's goal was also designed to deal an additional blow to the division project. Before the operations bore fruit, Turkey tried to get a sense of the pulse among the opposing side. It moved its troops toward the city of Al Bab. But the Syrian response came in the form of an air raid last Thursday that killed three Turkish soldiers. Ankara received the message, especially as it coincided with the progress of the "Arab-Kurdish protection units" backed by the Syrian army toward Al Bab. The airstrike had an Iranian-Russian cover. For this reason, Ankara moved quickly.

First came the calls between Erdogan and Putin on Friday and Saturday as well as a surprise visit by Turkey's Foreign Minister Mouloud Jawish Ihsanoglu and the director of intelligence Hakan Fidan to Tehran. The Turkish government wanted to know the parameters of the Syrian strike. The failure to capture Al Bab would translate into the Turkish intervention project having no effect on the Syrian army's battles, and Ankara being forced to be content with the red lines drawn for it. Ankara's acceptance of the results of the raid means allowing Damascus and its allies to impose their pace on the Turkish army and the groups affiliated to it. The Turkish delegation came to Tehran with its concerns. The presence of Fidan had a dual objective. He is the Turkish delegate who had a nonstop line of communication with Iran, specifically with the commander of the Quds Force Qassem Soleimani.

At the same time, he is the coordinator of the Syrian opposition's operations and support programs in the north since 2011 as well as being the secretary of the ruling Erdogan government and the bearer of the Turkish concerns in the region. The delegation wanted to justify Turkish control over Al Bab and its "positive impact" on Turkish-Iranian security.

The Iranian and Russian answers were clear, too, expressed by Iranian President Hassan Rohani's statement. Over the past years, Tehran has been using its relationship with Ankara to restrain it from directly intervening against the Syrian army. Then, Rouhani [the moderate face of the Iranian rule] changed the priorities, saying that stability in Syria and Iraq is the basis for cooperation between Tehran and Ankara. All of Ankara's options are now high-risk. It must respond to the painful blow its factions sustained in Aleppo, along with the partition plan. Submitting to the strike means opening the door to the possibility of thwarting the entire project.

However, its advance towards Al Bab city means paving the way towards the likelihood of a major confrontation that will not be confined between the Syrian and Turkish armies. There are of course a great many obstacles beneath the surface, most notably that Turkey's echelons of power are governed by the Atlantic military alliance. The head of this alliance in Washington is occupied with the transfer of power, and perhaps his priorities are different from those of his predecessor.

Meanwhile, Turkey might not be ready, from a logical standpoint, to risk its relations with Russia and Iran, especially in light of its declining economy. In addition to all of the above, Erdogan himself had already sent a message to the Iranians in which he claimed that his intelligence sources are warning that a second coup attempt against him is being prepared. He also stated that his cleansing procedures [campaign to root out coup plotters] are causing a variety of reactions, but he is forced to carry on, just as with the invasion of Syrian territory to prevent the establishment of a Kurdish entity.

But one possibility remains, which is that the Turks misread the situation and decide to enter Al Bab - assuming that they would not be harmed by the Syrian army - putting the entire region on a collision course. Would Erdogan dare?