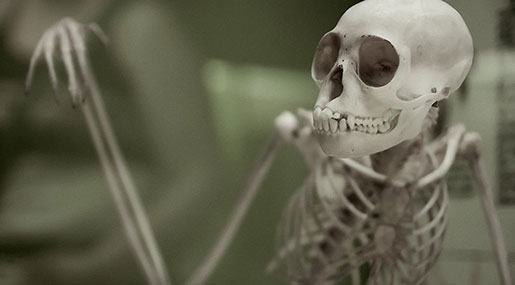 As such use of human body parts is no longer compatible with contemporary morals, Swedish schools face a dilemma of how to dispose of human skeletons, organs and fetuses with dignity.

In a recent study that encompassed 24 of Sweden's oldest upper secondary schools with a natural scientific bias, 80 percent of the schools admitted to having some forms of preparations made of human body parts.

Half of the surveyed schools had human skeletons as teaching materials, whereas a third had preserved fetuses in their labs.

Other materials include dissected brains, dried tissue and loose bones. Some of the teaching materials date back to the turn of the century and were collected using controversial methods that would be downright illegal today.

For instance, stillborn or aborted fetuses and organs from patients who died in mental asylums could end up in anatomical collections without consent in early 1900s.

Another problem is that it is next to impossible to correctly identify the remains in most cases. According to Stockholm's Södra Latin School, which owns a dried human head with skin, teeth and eyebrows, human body parts are generally not shown to pupils. Nevertheless, the school's faculty acknowledged the problem of ethical disposal.

"This kind of old stuff cannot be salvaged, this is the problem," biology teacher Eleonore Gåvsten told Swedish Radio.

According to retired teacher Lars Flygar, human body parts cannot be just thrown away either. "Imagine this head popping up somewhere. It would surely set off a murder case," Lars Flygar explained.

Many of the schools surveyed admitted that human body parts remain hidden from the public eye.

Nevertheless, there is a risk of unethical handling of the human remains without a national plan, Mats Johansson, associate professor of medical ethics at the University of Lund, told Swedish Radio.