The UK government rejected calls by two parliamentary committees for it to stop the sale of British bombs to Saudi Arabia's armed forces in Yemen. 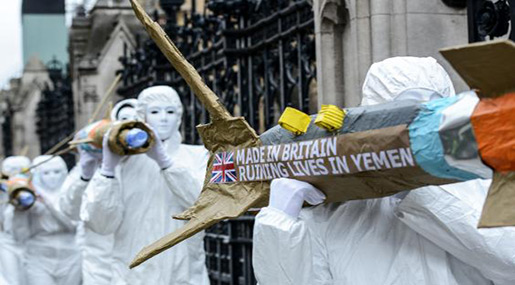 Saudi forces had been widely accused of committing war crimes during the campaign in the country, where reports on the ground suggest they had blown up international hospitals, funerals, schools, and weddings.

The country has been overtaken by famine with 370,000 children suffering from severe malnutrition and 1.5 million are going hungry overall, according to UNICEF figures released in October. Saudi led-coalition air strikes have hit food factories processing products including potatoes and sugar.

Two committees of MPs, the International Development and Business Committee, which sit on a parliamentary ‘super committee' called the Committee on Arms Export Control [CAEC], released a joint report calling for the suspension of arms sales until a UN investigation had been conducted into the atrocities.

A third constituent committee of CAEC, the Foreign Affairs Committee, did not endorse the report, and said it would be better for the British courts to decide the legality of the sales - with a legal challenge launched by Campaign Against the Arms Trade set to be heard in the coming months.

The Government however rejected the call for the suspension of sales.

"We disagree with this recommendation. The Government is confident in its robust case-by-case assessment and is satisfied that extant licenses for Saudi Arabia are compliant with the UK's export licensing criteria," the Government said in an official response.

He went on to say: "A license will not be issued for any country, including Saudi Arabia, if to do so would be inconsistent with any provision of the mandatory Criteria, including where we assess there is a clear risk that the items might be used in the commission of a serious violation of IHL."

The committees had recommended that "the UK suspend licenses for arms exports to Saudi Arabia, capable of being used in Yemen, pending the results of an independent, United Nations-led inquiry into reports of violations of IHL, and issue no further licenses.

"In addition, the UK Government should investigate whether any licenses so far issued have led to the transfer of weapons which have been used in breach of IHL".

Andrew Smith of Campaign against the Arms Trade pointed out: "The government is in denial about the devastating impact of the Saudi-led bombardment and its own complicity in it. This is a very weak response and makes clear that arms company profits are still being prioritized over the human rights and lives of Yemeni people."

"The evidence from the UN and others has been overwhelming, yet the government has refused to act. Johnson, May and their colleagues could stop the arms sales right now, but instead they are offering uncritical military and political support while helping arms companies like BAE to sell even more weapons," he added.

Since the beginning of the aggression, almost 10,000 people, including over 2,000 children, had been martyred.

London has been one of the biggest suppliers of weapons to Riyadh for 40 years.