At almost 9,000 km long, the Canadian-American border has become the fault line for Trump anxiety. 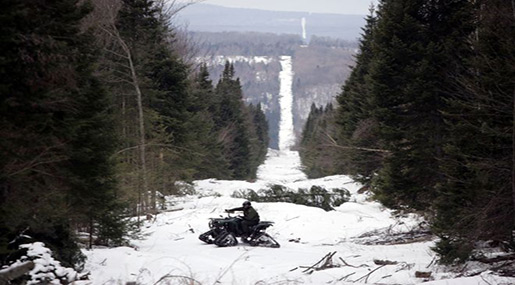 While Donald Trump has spoken about building a wall between the US and Mexico to keep immigrants out, it is Americans who may be trying to flee.

During this election's vicious campaign cycle, the idea of Americans heading to Canada became a political statement.

Celebrities like Snoop Dogg, Bryan Cranston, and Lena Dunham have threatened to move north of the border to escape a Trump presidency. When that possibility edged closer to a reality late Tuesday night, the Canadian government's Citizenship and Immigration website crashed due to what officials called "a significant increase in the volume of traffic."

Statistics provided by the government indicated over 200,000 people were trying to access the site at 11 pm when it crashed. American IP addresses accounted for some 50% of the traffic, instead of the usual 9% to 10%.

Still, few of these contemplating fleeing have actually expanded on why they want to come to the country besides the fact Trump will not be head of state and that they see the country as a friendly, progressive refuge.

And if shell-shocked Americans are seeking company to pair with their misery, Canada could be a haven.

"He has no political experience, he's a business man, a reality-TV star and you blink and he's the American president?" said a shocked Robert McNair, from Cambridge, Ontario about 150 km [93 miles] from Buffalo, New York.

The man was visiting Niagara Falls, Ontario, a border city and tourist hub that shares both the majestic falls and a border with New York State.

Here, and elsewhere in Canada, these cross-cultural exchanges are nothing rare.

Many people have family in both countries and, before the 9/11 terror attacks led to more security measures, Canadians and Americans along the border often crossed it casually with little or no formal ID.

Niagara Falls Mayor Jim Diodati said the community would be happy to welcome fleeing Americans on a more permanent basis.

"We'd roll out the red carpet. But don't believe there's going to be a mass exodus," he said. "The American spirit is strong and those were emotional statements."

The mayor thinks that once everything has settled down in the US, things will not have changed as much as people think they will.