Following the immediate aftermath of the failed coup attempt in July, Turkey has gradually been slipping out of the headlines. 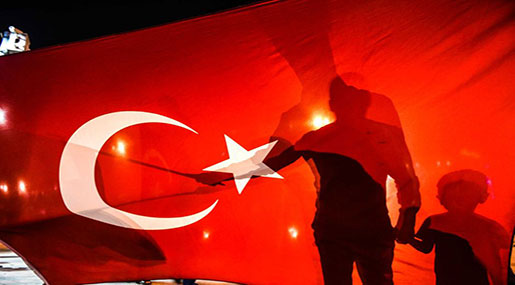 The mainstream media shifted its focus to multiple ceasefires in Syria, the bombing of Aleppo, and more recently, the battle for Mosul. But over the last couple of weeks, a number of developments suggest that a new wave of turmoil is brewing in the Middle East, with Turkey finding itself in the eye of the storm.

After a kiss-and-make up with the Kremlin, Turkish President Recep Tayyip Erdogan has also moved to improve relations with Tehran. The formation of this triumvirate involved a number of meetings at the highest level, the signing of bilateral agreements, as well as military cooperation in both Syria and Iraq.

And then, suddenly, the rhetoric sharpened on all sides. Contrary to just about every international diplomatic norm, Erdogan declared that Aleppo and Mosul actually belong to the Turkish people, demanding the ‘return' of the two cities.

In a similar context, Erdogan also called for the revision of the 1923 Treaty of Lausanne - specifically the part that involves the Ottoman surrender of the Aegean islands to Greece.

Despite these comments, however, one can safely say that the Aegean islands will remain in Greece's hands for the foreseeable future. But Erdogan's claims to Mosul and Aleppo naturally raised a few more eyebrows, given the uncertainty surrounding those two cities.

In the days that followed, a war of words between Ankara and Baghdad escalated, as reports surfaced of a Turkish military buildup along Iraq's northern border.
Iraqi Premier Haidar Al Abadi reacted harshly, warning that "if a confrontation happens, we are ready for it. We will consider [Turkey] an enemy and we will deal with it as an enemy."

Meanwhile, both Moscow and Damascus have warned Erdogan to stop violating Syria's sovereignty, threatening to "respond".

However, as is the case in Iraq, Turkey's military operations in Syria have continued without any kind of response. So what exactly is going on in the Middle East?

In short, Erdogan's erratic statements are aimed at the Turkish public, designed to shore up the president's position on the home front following an attempted coup. Nobody on the regional or international level is taking Erdogan's statements too seriously, since Turkey's ability to invade Aleppo and Mosul is as realistic a prospect as Ankara's chances of retrieving the Aegean islands.

Away from all the tough talk and insults, developments on the ground paint a picture of a very different reality.

On October 21, the head of Russian diplomacy, Sergei Lavrov, called on Ankara to end its military flights over Syria. Despite the fact that nothing concrete was done to address Lavrov's concerns, steps aimed at strengthening Russian-Turkish cooperation in Syria quickly followed.

This was best demonstrated by Vladimir Putin's decision on October 24 to begin sharing intelligence with Ankara, which paves the way for Turkey to become a part of Baghdad's joint intelligence-sharing centre.

According to a retired Turkish air lieutenant, General Erdogan Karakus, "the exchange of intelligence data, negotiations on the creation of a Turkish anti-missile defense system with the deployment of Russia's S-300 and S-400 systems... signifies the growing trust in relations between the two countries... Russian inspectors now perform observation flights over Turkey. This is one of the major indications of a new stage in development of Russian-Turkish relations".

Despite all the friction on the surface, Ankara, Damascus and Baghdad share a common denominator - Kurdish separatism.

Whether willingly or unwillingly, all three are currently cooperating with at least one Kurdish military formation in their fight against Daesh. But the terror group is already yesterday's fight. Tomorrow's will begin when the issue of a Kurdish state is officially brought to the forefront.

The Prime Minister of Iraq's Kurdistan Regional Government [KRG] told the German daily Bild that Erbil would renew its push for independence once Mosul is retaken from terrorists.

"We are not Arabs, we are our own Kurdish nation... At some point, there will be a referendum on the independence of Kurdistan," Nechervan Barzani said.

For its part, the Syrian army has clashed with Kurdish militias on a number of occasions, which have already called for the federalization of Syria, while Turkey hangs on the brink of an all-out civil war.

As such, the interests of all three states are intertwined, with the focus soon expected to shift to a joint effort to drown all apparitions of a Kurdish state, which currently enjoys Washington's full support.

On October 30, the US State Department ordered the families of American diplomats in Istanbul to leave due to an increased risk of terrorist attacks.
"This order applies only to the US Consulate General in Istanbul, not to other US diplomatic posts in Turkey," the travel warning stated.

Just hours earlier, a renowned journalist and Middle East expert Israel Shamir, released an article about his impressions of the situation in Turkey, where he had met with a long list of ministers, and local media personalities.

"It appears that the American administration decided to ditch the unruly Erdogan some time ago, and install Gülen's man Ahmet Davutoglu in his stead," Shamir writes.

Shamir goes on to single out "a leading American neocon... Michael Rubin," who he says advocated the July coup.

In one of his more recent opinion pieces for Newsweek, Rubin - who is a former Pentagon official and a ‘specialist' on both Turkey and Iran - explains, "Erdogan may believe he is sultan but, in reality, he may already be dead man walking."

"The new putsch is expected on November 10 or thereabout, and it will begin with Erdogan's assassination," he writes.

Warning that Turkey is currently walking a thin line between stability and the possibility of turning into another Syria, Shamir explains that, "the Americans prefer to dismantle Turkey altogether, and create a Great Kurdistan from the mainly Kurd-populated areas of Turkey, Iraq and Syria."

Looking back at the failed July coup might go a long way in explaining why the State Department is evacuating the families of diplomats from Istanbul alone. Much of the violence that took place between the putschists and those loyal to Erdogan's government unfolded in Istanbul. After all, half of the total number of people killed on July 15 lost their lives on the city's First Bosphorus Bridge.

The threat of terrorism is a new reality in Turkey. But terrorist attacks are as likely in Istanbul as in Ankara or any other Turkish city. The deadliest coup-related violence, however, is expected along the Bosphorus, and this time its architects want to be prepared.