Agustin Carstens, governor of the Central Bank of Mexico, said on Wednesday that his country is preparing a contingency plan in case of an "adverse" result in the US presidential election next Tuesday. 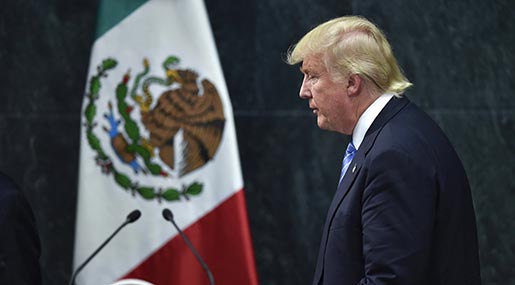 In the past, Carstens said that a Trump presidency would be devastating for Mexico, and compared the self-promoting billionaire to Benito Mussolini and Adolf Hitler.

Carstens told Mexican television, "If the adverse situation materializes it's foreseeable that the Mexican authorities respond in some way," and added that he hopes "we don't have to use it."

Carstens didn't expound on the details of the plan, but said Mexico City will have to adjust its economic policy regardless of who becomes the American president.
"Either way, we the authorities would need to adjust our policy position if it's necessary," he remarked.

The peso has been hurt by Trump's call to break Mexican-American trade deals and build a wall separating the two countries to stem the tide of immigrants.

He went on to say: "Some economists feel that Mexico would weather a Trump presidency by using rate hikes and currency reserves, but Finance Minister Jose Antonio Meade does not believe this would be an effective tactic, suggesting that intervening in the market would be similar to "pouring drops of water into the ocean...It is not an instrument that would work."

Mexican President Enrique Nieto drew the ire of many when he invited Trump to Mexico, despite the latter's racist and anti-immigrant comments.

Responding to Trump's call for Mexico to pay for his proposed wall, former president Vicente Fox declared, "I'm not going to pay for that ... wall." Former first lady Margarita Zavala said, "Even though you may have been invited, we want you to know you're not welcome. We Mexicans have dignity, and we reject your hate speech."

Carstens stated that a Trump presidency would hit Mexico like a hurricane, and Latin Finance quotes him as saying, "The United States is our leading trade partner; 80 percent of our exports go there," and, "Any change in that would have a very important impact. If the next US administration implements protectionist policies, it would have an adverse effect on us."