Russian President Vladimir Putin has categorically denied that Russia has been trying to influence the US election using cyber-attacks or any other means, saying that the "hysteria" was being whipped up to distract attention from the failure of American politicians to solve domestic problems. 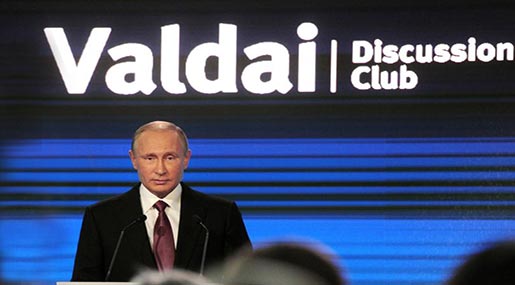 "Does anyone really think that anyone can influence a US election?" he asked. "Is it a banana republic, or something? No, it's a great power."

The accusations were simply a ploy to disguise the fact that the US political elite had not got to grips with the deficit, gun crime or "arbitrary policing", Putin claimed, adding: "It's much simpler to distract people with so-called Russian hackers, spies, and agents of influence."

Russia, he went on, "has no intention of attacking anyone - to say so is just a joke".

The President was speaking to international Russian specialists at the closing session of the annual Valdai Club meeting, which has been held in recent years at the Winter Olympics resort of Krasnaya Polyana, in Sochi.

Putin has attended the session every year since the group was founded in 2004 and submits himself to a marathon of questions. This year he notched up more than three hours, without any sign of flagging.

He shared the platform with three former presidents, Tarja Halonen of Finland, Heinz Fischer of Austria and Thabo Mbeki of South Africa, and the wordy theme for the afternoon was "a philosophy of international development for the new world". But the focus of attention, as always, was Putin, whose show it was from the start.

The Russian President may have sounded combative on the politics of the US - where Russia has become a weapon in Hillary Clinton's campaign against the supposedly Putin-friendly Donald Trump.

In almost every other respect, though, he came across as more emollient than in some other years, stressing a desire to show restraint and avoid inflammatory language, even as he regretted the lack of dialogue between Russia and the West and lamented the fact that, as he saw it, relations had not improved.

Speaking about Syria - perhaps the biggest source of tension between the US, the UK and Russia at present - Putin charged the US with repeatedly failing to honor its undertakings, specifically on separating Takfiri al-Nusra Front and other forces fighting in Syria.

He defended the bombardment of eastern Aleppo by Syrian government and said Russian air power was essential to root out what he called the "nest of terrorists" there, but conceded the difficulty of such an operation in a city where civilians were still living.

This was the same difficulty that faced the current US-backed operation to eject Daesh [Arabic acronym for "ISIS" / "ISIL"] from the Iraqi city of Mosul, he noted.

Asked about Russia's supposed preference for a Trump victory in next month's US election and what might await Russia-US relations under a new president, Putin started with a text-book answer. Any suggestion that Russia had "favorites" or "non-favorites" in the US election, he said, was a fiction being "peddled into the public consciousness with a single purpose, to support the battle being waged by those who represent the interests of the Democratic Party."

He said he had no idea who would win, but that Trump "represents those who have grown tired of losing out to the interests of the elite... and those who don't like to see power inherited". Returning to a slightly happier, more conventional note, he said: "We will work with any president who is elected by the US people and who also wants to work with us".