The US-led anti-Daesh [Arabic acronym for "ISIS" / "ISIL"] coalition does not actually seek to eliminate the terrorist threat in Iraq or Syria, Leader of the Islamic Revolution His Eminence Imam Sayyed Ali Khamenei said on Tuesday. 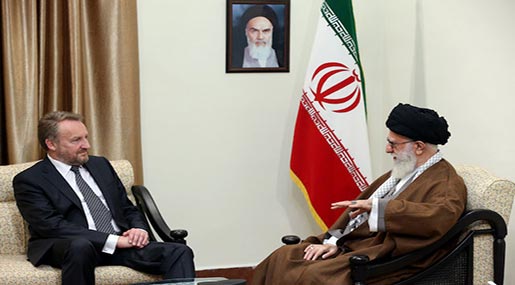 The US-led coalition of more than 60 nations has been conducting airstrikes against Daesh in Syria and Iraq since 2014. The strikes in Syria are not authorized by the Syrian government or by the United Nations Security Council.

"Although such coalitions may even clash with terrorists in some instances, they are not after genuinely rooting out terrorism in Iraq or in Syria," the Leader said during a meeting with the chairman of the Presidency of Bosnia and Herzegovina, Bakir Izetbegovic, as cited by ABNA news agency.

Imam Khamenei pointed to the wave of Takfirism and terrorism, which had now spread to Europe and could probably bring about a more severe situation in the future.

According to media, Imam Khamenei stressed that some of the Western counterterrorism policies were even exacerbating the situation on the ground and contributing to the worldwide spread of terrorism.

He stated that: "The birthplace of this phenomenon is apparently the Arab region; however, it is the government of the United States and certain European states who are among key benefactors in the emergence of global terrorism."

The Leader went on to say that "Humiliation of young Muslims in some wealthy and powerful European countries have prepared ground for them to join deviant terrorist groups like ‘ISIS'; thus, these young and humiliated Muslims, on their return to Europe, commit murderous acts of terror."

Izetbegovic arrived in Tehran on Monday at the invitation of the Iranian President Hassan Rouhani. Imam Khamenei met with him on Tuesday evening.