Hizbullah Secretary General, His Eminence Sayyed Nasrallah delivered on Sunday a televised speech commemorating a week on the martyrdom of the martyr Leader Hajj Hatem Hamade. 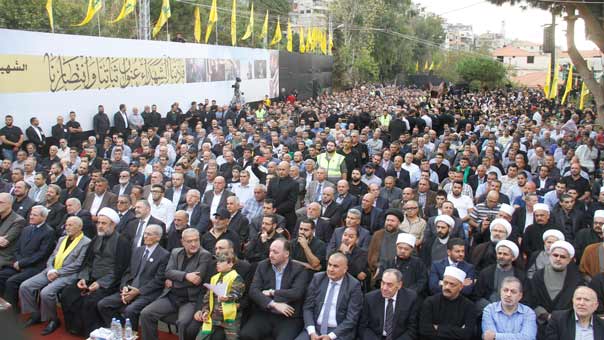 At the beginning of his speech, Sayyed Nasrallah condoled the family of the martyr as well as his companions.

"We're all affected by the loss of our beloved. However, we‘ve been taught from Imam Hussein that all sacrifices are in God's eyes," he stated.

In parallel, His Eminence revealed some aspects of the martyr's life. "He is known to us as Haj Alaa. He is the son of this lovely village in the Lebanese mountain."

"Haj Alaa is the son of Mount Lebanon, with all that it carries of history and values," His Eminence stated, noting that the martyr "is the son of the Islamic Resistance, which he joined as a young man and became white haired in until martyrdom."

Moving to the Syrian field, Sayyed Nasrallah highlighted that "with the emergence of the Takfiri danger, martyr leader Alaa was from the early leaders who attended the field since the first battle in Tel Mando, in the outskirts of al-Quseir."

"After the war in Syria started, the martyr became in charge of protecting Lebanon's eastern border," he said, and pointed out that "Alaa was among the key leaders who led the battle and were on the front lines. The first victory was achieved and the danger was distanced from Hermel."

According to His Eminence, Hajj Alaa was one of the main leaders in the Qalamoun operation, where the second victory was scored.

Hailing the sacrifices of the Resistance men, Sayyed Nasrallah mentioned that "recently, no more booby-trapped cars came from Qalamoun because the conditions are uneasy for the terrorists."

However, he warned that there is still a possibility in Ersal, but the blockade prevents the terrorists from achieving their goals.

"If we today enjoy security, it is because of this blessed blood and sacrifices that we must know its virtues," he confirmed, praising the major and basic roles the martyr had played in the operations room as well as in the field.

In this context, His Eminence highlighted that "the security we are living in now is not the outcome of agreements or mere prayers, but it is the outcome of efforts made by martyrs and their blood."

In addition, Hizbullah Secretary General stressed that it was necessary to bolster Hizbullah's presence in Aleppo with senior leaders, topped by the martyr Alaa, who was about to make a military achievement when he was martyred while fighting on the front lines.

"We have said that the Aleppo battle is decisive for the entire region because it will have military, strategic and political repercussions," he added, clarifying that the party took its choice to go to Syria in light of a full and thorough study of regional events. "Nobody ordered us to do so."

He further mentioned: "Martyr Alaa and all his companions are the martyrs of insight and the battle to us is adequate, and we have no suspicions regarding it."

On the political front, His Eminence explained that objectives of the countries have started to surface and we now know who armed, financed and brought the militants from all over the world to Syria, and the parties that are blocking reconciliation in Syria.

He also said that Saudi Arabia has supported and financed Daesh, according to the leaked Clinton emails, unveiling that Daesh's establishment aimed to insult Islam and the name of the Prophet Muhammad [PBUH]. "They want to topple this name, which has always shined in this world with glory, into the darkness of Daesh."

His Eminence also said that the US sought to use Daesh to achieve some goals in the region, and that the group could not be defeated through statements or words, but must be crushed on the battlefield.

"We have to be there, on the battlefield and in the media...the danger threatens everyone," he said.

"Day after day, it is being realized that the battle in Syria was not aimed at toppling a certain regime. It was aimed at making existential changes on the ground as well as to the political map of the region. It was a battle aimed at making demographic and border changes," he emphasized, noting that "what was happening in the past few years was aimed at uprooting certain groups of people from the region."

According to His Eminence the decision of going to Syria was very well studied after observing the regional developments that began in Tunisia and reached Syria. Refuting all claims regarding Hizbullah's presence in Syria, Sayyed Nasrallah was firm in reiterating the resistance's position:

"The battle in which the martyr Alaa was martyred is still ongoing and we will maintain our presence in it," he said, affirming that Hizbullah will not return to Lebanon before the axis of Resistance achieves a final and decisive victory in Syria.

Proud of Our Martyrs

To those who are betting on the resistance men and their families tirng, the Resistance Leader advised them to give up. "We fought "Israel" from 1982 to 2000, and when we liberated the land we started preparing for the coming battles."

"We are proud of our martyrs in Syria and are never ashamed of their number," he underscored, assuring that the other project has suffered from significant and watershed failures and this started to become clear.

On the same level, Sayyed Nasrallah also slammed the inaction and passivity of international human rights bodies toward crimes being perpetrated by Daesh terrorists in Iraq and Syria.

"Despite hundreds and thousands of people having been either beheaded or killed in other ways by this group, world rights bodies maintain their silence toward its crimes," he said.

From Yemen to Iraq

Commenting on the Saudi atrocities in the impoverished Yemen, His Eminence cautioned that the Saudis' restrictive measures and blockade against Yemen have affected the lives of more than 20 million people.

"This comes as the international community failed to end the Saudi brutal embargo on the Yemeni people," he lamented.

Regarding the Iraqi launch of the operation to liberate Mosul, Sayyed Nasrallah went on to say that the Iraqi people from all walks of life are currently fighting Daesh terrorists, and dozens or even hundreds of people are sacrificing their lives in order to liberate Mosul.

Moving to the Lebanese political front, he welcomed the head of the Future party Saad Hariri's endorsement of MP General Michael Aoun's nomination.

"This is an important development that largely paves the way for holding the presidential election in a realistic manner," he highlighted, confirming that "despite the fact that Hariri's speech carried within it escalation and attacks against us, but we will not respond now and we will focus on the positive side."

In parallel, His Eminence assured that "there is no one who thinks of bilateral administration to the country i.e. neither on sectarian nor on a political basis."

As he neglected any talk of rift between Hizbullah and Amal, Sayyed Nasrallah stressed that any dispute, big or small, won't make us forget our alliance.

He further hailed the relation with Amal and its leadership, represented by House Speaker Nabih Berri, describing it as "stronger" than all the media and political "fabrications".

"Some parties are trying to stir discord between us and the FPM, between us and Amal, and between us and Marada Movement," he stated, explaining that "we sit together with Speaker Berri and we discuss the things that we disagree on. We understand Speaker Berri's stances and he understands our stances. We will vote for Aoun in the presidential election session and Amal might vote for someone else. This is not a distribution of roles but is rather called 'allies who respect each other."

"Our electoral choices will not affect our good ties," Sayyed Nasrallah stressed.

He further assured that the Loyalty to the Resistance Bloc MPs would submit a vote for Aoun, dismissing accusations that Hizbullah sought to indefinitely prolong the presidential vacuum.

"All the votes from the Loyalty to the Resistance Bloc will be for General Aoun, and if we could reveal our ballots, we would," Hizbullah Secretary General said.

Sayyed Nasrallah also said that his party will not oppose Hariri's return to the premiership under an agreement for Aoun to be elected president.
"Nothing was for free. There were discussions for more than a month. They asked about the premiership should they accept to vote for General Aoun for president," he said, unveiling that the Future (mobement) had received an answer from General Aoun and from Gibran Bassil and yet they insisted on asking us and hearing from us and we told them that we do not mind."

His Eminence also said: "This a huge decision on all the political and psychological levels. Some parties are saying that they are offering sacrifices and I would also like to announce that we are offering a very big sacrifice when we say that we are not opposed to the appointment of ex-PM Saad Hariri as premier."