Bahrain's police received UK training on how to tell bereaved families that officers will not be prosecuted after a loved one has died in custody, international human rights group Reprieve found. 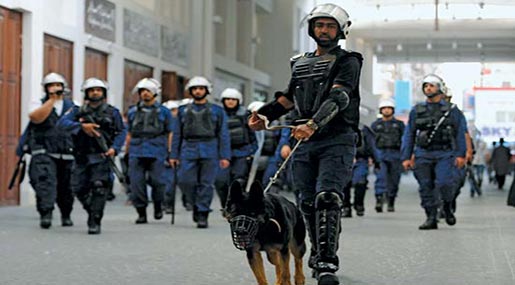 The training was part of a criticized multimillion-pound Foreign Office aid program with the Gulf kingdom, whose security forces use torture and death sentences.

The revelations adds to growing concerns about the use of Britain's police and security forces as "guns for hire" to despotic regimes.

Bahrain's poor human rights record had been highlighted recently by the case of Mohammed Ramadan, an innocent father of three who has been held on Bahrain's death row since 2014 after he was tortured into making a false confession.

An investigation into his mistreatment, launched in 2016, had been deeply flawed and failed to meet international standards.

An email shows that senior Bahraini police asked Northern Ireland's Police Ombudsman in January 2016 for advice about how to present its handling of police complaints:
"Another topic for discussion which was raised is your use of Family Liaison Officers in maintaining the confidence of the deceased's family in the investigation, and how they deliver difficult messages for example where prosecution is not being recommended. [[Name redacted] has asked if possible could the case of [one line redacted] be discussed? As this was an interesting case as your office vindicated the actions of the officer]."

The visit to Belfast was requested by the UK Foreign Office and organized by NI-CO, a company owned by the Northern Ireland government. The study visit focused on investigations involving deaths or serious injuries caused by police and how to liaise with families in these cases, according to emails obtained through freedom of information requests by Reprieve.

The Bahraini police delegation was from the Special Investigations Unit [SIU], an outfit that is meant to bring prosecutions against officers suspected of abuse. It has received UK training since 2014.

Human Rights Watch criticized the SIU's performance, saying that in the last three years, 138 abuse allegations were referred to the SIU, but it only successfully prosecuted one torture case.

Barely two months before the study visit, the SIU announced that the police officers who allegedly tortured France24 journalist Nazeeha Saeed during the Arab Spring would not be prosecuted. They claimed that there was "insufficient evidence", despite her providing three medical reports of her injuries.

Maya Foa, a director of Reprieve, said: "It is shocking that Britain paid for Bahrain's police to learn how to whitewash deaths in custody. Bahrain's police have tortured innocent people like Mohammed Ramadan into confessing falsely to crimes that carry the death penalty, and intimidated relatives who try to complain."

Foa wnt on to say: "Meanwhile, the UK taxpayer is paying Bahrain's police to learn how to tell bereaved families that officers won't be prosecuted after deaths in custody. The FCO needs to urgently suspend NI-CO's work with Bahrain."

The group also said that at least one innocent man faces imminent execution after being tortured into making a false confession.