If militants in eastern Aleppo break from Al-Nusra Front, the latter must face leaving voluntarily or be annihilated, Russia's envoy to the UN said, adding that the 8-hour ceasefire on October 20 can be extended, but only if various sides agree. 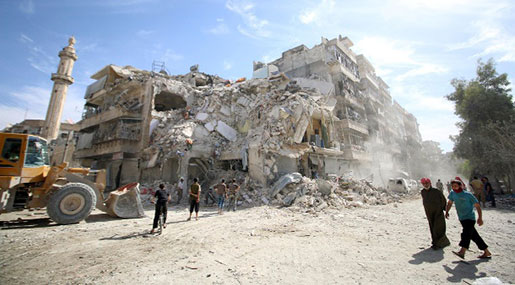 Speaking in the wake of the UN Security Council meeting on Monday, Russia's permanent ambassador to the UN, Vitaly Churkin, said that Russia is ready to grant Jabhat Fateh al-Sham, formerly known as Al-Nusra Front, terrorists in eastern Aleppo an opportunity to leave the city unharmed if the so-called "moderate rebels" agree to clearly distance themselves from the terrorist group.

However, if they refuse to abandon their positions in Aleppo, they should get ready to be wiped out, Churkin said.

"If they distance themselves, then we will offer Jabhat Al-Nusra two options to choose from: either they leave the city, and Staffan de Mistura, [UN special envoy for Syria], as you know, came out with a proposal regarding this some time ago, which has not been accepted by Jabhat Al-Nusra yet, or we will have to defeat them," Churkin said, as cited by TASS.

He was referring to de Mistura's earlier proposal to personally accompany some 900 Al-Nusra fighters that are estimated to still retain positions in eastern Aleppo, on their way out from the city to other parts of Syria.

If that scenario is implemented, it will mean the end of bloodshed in Aleppo on condition that all other armed groups enter into ceasefire agreements with the Syrian government following Al-Nusra's exit, Churkin said.

Meanwhile, New Zealand submitted its draft resolution on Aleppo to the UN Security Council on Monday. The document calls for the immediate and complete end of attacks that can affect civilian infrastructure or result in civilian casualties. It also stipulates 48-hour pauses in fighting to enable humanitarian aid deliveries and underscores the need to separate the opposition from UN-recognized terror groups in Aleppo.

The chances of this plan succeeding are quite reasonable if the so-called "moderates" greatly outnumber Al-Nusra fighters, Churkin said. The ratio can be as high as 10 to 1 or even 12 to 1, if estimates of somewhere between 10,000 and 12,000 militants in Aleppo provided by the UK's Foreign Office are accurate, the diplomat added.