Late on Wednesday evening, the United States bombed Yemen's Houthis for the first time, launching cruise missiles at three Houthi-controlled radar installations. The strikes were billed as limited retaliation: Twice in the past week, missiles have been fired from Houthi-controlled territory at US warships in the area. 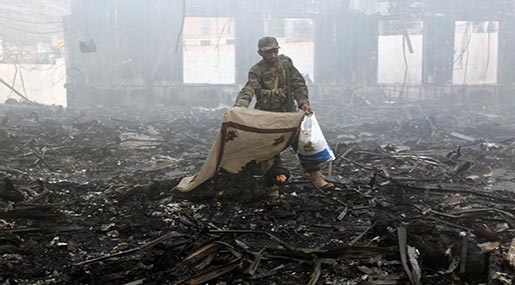 But there's a bigger story here: The United States has, for more than a year now, been quietly participating in a Saudi-led war against the Houthis, providing valuable logistical support for Saudi Arabia's airstrikes. So this missile exchange isn't something out of the blue. It's an escalation of current US policy, moving from indirect to direct participation in the Saudi offensive.

The problem, though, is that the Saudi campaign is utterly vicious.

Saudi airstrikes have struck civilian targets like marketplaces and funeral homes. Their warships have blockaded Yemeni ports, helping to create a humanitarian catastrophe in which children are literally starving to death.

"I honestly don't know how to describe in words how desperate the situation is in Yemen," says Kristine Beckerle, a Yemen researcher at Human Rights Watch. "It's a step away from famine."

So the current exchange raises a fundamental question for the Obama administration: How much further are they willing to go in support of their allies' war crimes?

Who are the Houthis and why is Saudi Arabia bombing them?

To understand the US missile exchange, you have to understand who the Houthis are - and why one of America's key allies in the Middle East has gone to war against them.

The Houthis are from the country's northwest and are religiously Zaydi, an offshoot of mainstream Shia Islam. Yemen's Zaydis are concentrated in the north, while southern Yemen is largely Sunni. This creates two axes of tension inside Yemen: Religious tension between Sunni and Shia, and regional tension between the country's North and its South [which were separate countries until 1990].

The Houthis, began in the 1990s, was principally motivated by regionalism rather than sectarianism per se. The issue was a perception that Yemen's northern residents were being underserved and under-resourced by the central government, rather than a religious war between Zaydis and Sunnis.

"The current armed conflict in Yemen began, essentially, as a domestic struggle for power between political and tribal factions," Farea al-Muslimi and Adam Baron, two leading experts on Yemen, write in a paper for Yemen's Sanaa Center for Strategic Studies.

Between the early 1990s and 2010s, Houthi forces sporadically clashed with government forces. But in January 2011, the Arab Spring changed everything: A broad-based Yemeni uprising toppled dictator Ali Abdullah Saleh, who had been in power for 33 years. The chaotic aftermath of the uprising weakened the central government, fracturing its military forces, thus relatively strengthening the Houthis.

In November 2011, Saleh signed an internationally brokered agreement to hand over power to his deputy, Abd Rabbu Mansour Hadi, who was tasked with forming a transitional unity government.

Eventually, after a series of failed attempts to reach a national consensus among the various rival groups, the Houthi forces mobilized and deposed Hadi, kicking off a full-on civil war in September 2014.

In response, Hadi asked his good friend Saudi Arabia to help him battle the Houthis and take back control of the country. The Saudis were more than willing to jump in the fight: The Houthis are hostile to Saudi involvement in their country, seeing the monarchy-cum-Sunni-theocracy as a force for Sunni sectarianism and repression of the Zaydis.

And so the campaign began.

The US is Aiding and Abetting Criminal Behavior

The United States has backed the Saudi-led effort, in part because it shares some of Saudi Arabia's concerns about Iranian influence in the region, but also because it has a strong interest in keeping the Saudis happy so they'll support the US-led fight against "ISIS" in Iraq and Syria. In addition to providing logistical and intelligence support to the Saudi war effort, the US in November 2015 approved a $1.3 billion arms sale to Saudi Arabia.

But the Saudi-led coalition has succeeded in doing tremendous harm to Yemeni civilians. Since the bombing campaign began in March 2015, over 4,000 civilians have been killed in the fighting. According to Human Rights Watch's Beckerle, most of those have been killed by the coalition or its Sunni Arab allies.

HRW has documented 58 separate instances of Saudi airstrikes on civilians that violate the laws of war, including attacks on hospitals and water bottling factories. Just this weekend, Saudi forces bombed a funeral home, killing 140 people and wounding another 525.

"One of the routine patterns that we've seen is attacks on civilian infrastructure," Beckerle says. "It does really raise serious concerns that the coalition was trying to inflict widespread damage on Yemen's production capacity."

To make matters worse, the Saudis have also imposed a blockade on Yemen, preventing goods from entering the country by sea or air. This has put Yemen's civilian population in great peril: Even prior to the war, Yemen was the Middle East's poorest country. Over 90 percent of its food supplies were imported.

Since the Saudis cut off this flow of goods, the situation for civilians has become nightmarish. Half of Yemen's population - 14 million people - doesn't have enough food to eat, per the UN. A shortage of medical supplies is devastating the country's health infrastructure.

"There are babies dying in incubators because we can't get supplies to treat them," Ahmed Yahya al-Haifi, a doctor at Sanaa's Republic hospital, told Middle East Eye.

This hasn't been discussed that much in the American press, which doesn't really see logistical support as the US being at war somewhere. But the fact of the matter is that the US is a co-belligerent with Saudi Arabia, providing the support that allows it to wage this brutal, bloody war. Even some Obama administration allies are publicly criticizing its approach.

"There's an American imprint on every civilian life lost in Yemen," Democratic Sen. Chris Murphy told CNN's Jake Tapper. "Though the Saudis are actually dropping the bombs from their planes, they wouldn't be able to do it without us."

Now, as we've seen, this has led to direct bombing. It's not quite clearly why, exactly, missiles were fired at US warships. It could be retaliation for the US role in the Saudi campaign... The Houthis themselves deny responsibility for the missile attacks, making it even harder to figure out what's going on.

The US retaliation, so far, has been relatively proportional. The US targeted radar installations, not civilian infrastructure; it appears to be a one-off retaliatory strike rather than the beginning of a broader offensive.

But the incident shows the potential for the US presence in this war to escalate. The US, whether we acknowledge it or not, is helping one side of this war. Doing so requires putting US military assets in the region, which puts them in danger of being targeted. The more US forces are targeted, the more likely the United States is to step up its direct military involvement in a fundamentally unjust and vicious war.

Luckily, the missiles fired at US warships in the past week have all missed. But even that provoked a response. Imagine if they were hit, and US sailors had died. Imagine how much of an escalation this would result in.

Then ask yourself this question: What's the upside for the US here? Why is it willing to put its own people in danger in service of a brutal, ineffective military campaign led by a theocratic dictatorship?