Putin then accused the West of destabilizing the region - citing the so-called Arab Spring in 2011 as a key flashpoint for tensions that still dominate the Muslim world. 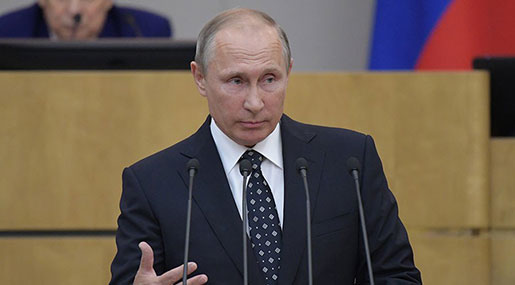 "I believe deeply that some of the responsibility for what is happening in the region in general and in Syria in particular lies especially with our western partners, above all the USA and its allies, including the main European countries," said Putin.

"Remember how everyone rushed to support the Arab Spring? Where is that optimism now? How did it all end? Remember what Libya or Iraq looked like before these countries and their organizations were destroyed as states by our western partners' forces?"

Putin linked the volatility in the region to the recent spate of large-scale terrorist attacks in the West, which have either been planned or inspired by terroris groups such as Daesh [Arabic Acronym for the terrorist "ISIS"/ "ISIL" group] which have thrived in the chaos.

"[Before the Arab Spring] these Middle Eastern countries were not examples of democracies as we understand the word today, and there probably was a need and possibility to influence these societies' organization, the state organization, and the nature of these regimes," said Putin, who was attending a festival dedicated to Sambo, a Russian combat sport.

"But whatever the case, these states showed no signs of terrorism. They were not a threat for Paris, for the Cote d'Azur, for Belgium, for Russia, or for the United States. Now, they are the source of terrorist threats. Our goal is to prevent the same from happening in Syria."

Putin also detailed his version of the breakdown of the long-negotiated joint operation between Washington and Moscow in Syria, claiming the key turning point was the September 16 US-led coalition strike on a Syrian army unit, which the Pentagon maintains was accident.

"Our American colleagues told us that this airstrike was made in error. This error cost the lives of 80 people and, also just coincidence, perhaps, Daesh took the offensive immediately afterwards.

At the same time, lower down the ranks, at the operations level, one of the American military service personnel said quite frankly that they spent several days preparing this strike. How could they make an error if they were several days in preparation?" said Putin. "This is how our ceasefire agreement ended up broken. Who broke the agreement? Was it us? No."

However, Putin reiterated that Russia is still open to helping resolve what the UN has termed the worst humanitarian crisis since the war - which has likely killed over 400,000 people - began five years ago.

"It has been proposed that our armed units, Russian military personnel, be deployed on the road to ensure transit safety [for aid convoys to Aleppo]. The Russian military, who are courageous and decisive people, have said they would do it," said Putin, who said that the initiative, which had not previously been made public, was an "exotic proposal."

"But I told them that this could only be done jointly with the US, and ordered them to make the proposal. We have proposed this, and they [the Americans] promptly refused. They do not want to deploy their troops there, but they also do not want to pull back opposition groups - who are, in fact, terrorists. What can we do in this situation?"

Despite the downbeat tone of the interview, Putin insisted he was still "optimistic" about a diplomatic solution in Syria, and claimed that the offer to "reschedule" next week's visit to France, which was canceled following a diplomatic snub by Francois Hollande, was genuine.

"This is not the best moment for official meetings, given the lack of mutual understanding, to put it mildly, that we have over events in Syria, particularly the situation in Aleppo. But we are always open, of course, to any consultations and dialogue on this matter," said Putin