Before I begin I would like to wholeheartedly admit to my lack of objectivity ... the words I will offer you in the following are prejudiced in that they come in support of an idea - a movement which I believe to be righteous: Resistance in the face of oppression. 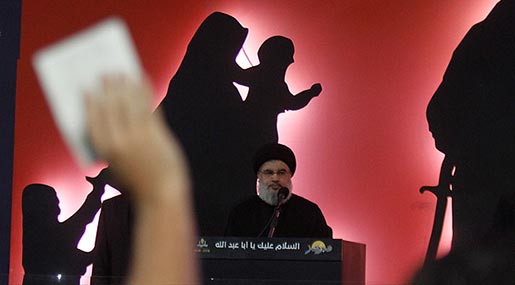 Resistance we like to fool ourselves to believe comes naturally ... and yet so many of us have chosen submission and servitude for a lack of courage, and pandemic apathy. For all our grand claims of moral humanity we have almost systematically failed in our duties as communities remain under the grip of tyrannical violence.

Resistance stands nevertheless a moral duty. For millions of Muslims around the world Resistance is a religious act, a call one cannot shy away from without risking to deny that which was made lawful and that which God forbade. I mean not to say that Muslims have a monopoly on righteousness, only that they are held to a Truth which is Divine, and which they owe allegiance to.

Sectarianism is for me a negation of the religious. One cannot speak of God and claims ownership over Him. God belongs to no man; it is us who must bow. But enough with that ...

Today I want to speak of Resistance and Oppression - Truth versus Deceit, Slavery versus Freedom.

As we sit on the Eve of Ashura, let us speak a few truths and admit to our collective shortcomings. Let us not pretend anymore that Islam remains a guidance when so many self-proclaimed Muslims have worked to legitimize the unlawful so that they could sanitize the unpalatable and call it good.

You know of whom I speak - the Yazid of our days, who, from their golden palaces have rained death on communities and called it liberation. I speak of those powers who continue to drape themselves in righteous democracy while denying those who strive to protect the innocent. I speak of those political constructs which have defiled nations' natural rights to territorial integrity so that they could claim ownership over their future.

What is truth today? Is truth a matter of perspective? Is it a point of view to be manipulated as to fit a narrative?

Truth I will argue is universal. Truth requires no fanfare, no dressing or framing of any form. Truth is found in the actions of the righteous, and Truth stands for no apology.

Truth this month of Muharram was spoken in Beirut ... Truth was made manifest in the words of our Sayyed, as he breathed Hussain's Revolution back to life and proclaim his allegiance to Islam's prophet.

It is likely you missed the momentous speeches Sayyed Hassan Nasrallah spoke ahead of Ashura. It is likely your media have barred, blocked and otherwise ensured that not a word of his would transpire ... Sayyed Nasrallah is after all a threat to Tyranny, and Tyranny is what the world has learn to cower under.

I will ask you here to lend me an attentive ear. Look not upon Sayyed Nasrallah as the leader of Hizbullah, see not in him a political leader in need of a platform to promote his message. See him for what he is: a son of Hussain ibn Ali, a Shia of Muhammad, a man whose lineage has carried a light which no man will ever extinguish.

As he rose upon his platform, it is as a son of Islam, an Imam in the fashion of the First Imam, and a servant of the only House worth following for its guidance was appointed by God.

Even if you do not share in his religious views, it is difficult to fault his call for justice and freedom - especially when he offers them absolutely and without any pre-requisite.

On the Eve of Ashura it is allegiance Sayyed Nasrallah demanded of Muslims - beyond matters of creed and schools of jurisprudence. It is allegiance which was offered to him ... of that you will never hear.

Of that you will never hear for unity terrifies those powers which to this day have claimed ownership over Islam so that they could pervert its message and traditions. But it is Islamic unity nevertheless which was forged in Beirut this Muharram 2016.

Two centuries after Nejd came to ransack Islam and enslave communities ... so much so that it branded its name upon the Hijaz, allegiance has been returned to the Sayyed.

Just as War has but completely ravaged the Greater Middle East under the dark banner of Wahhabism, it is Resistance which has returned to those who still aspire to breathe free from the yoke of tyranny.

Have you forgotten the cries of your Imam as he stood alone in the plain of Karbala? If many turn away still, others do not.

On the Eve of Ashura, only a month after Sunni Islam most senior leaders rejected Wahhabism as the expression of a heresy too despicable to be tolerated, one of Sunni Islam's highest authority: Sheikh Ahmad al-Zein pledged his allegiance to Sayyed Hassan Nasrallah. By speaking but a few simple words Islam came united once more, no longer burdened by the shame of sectarianism, no longer will it be the property of the House of Saud.

This Muharram 2016 it is Unity Islam's Sayyeds called for. From Lebanon to Syria, Iraq, Yemen, Afghanistan, Bahrain and Iran, beyond all petty differences it is the same message of Resistance, Justice and Liberation against oppression which has echoed.

It is also reform Sayyed Nasrallah called for on the Eve of Ashura - reform from Falsehood and blind radicalism.
Addressing the disturbing actions of a growing minority few, Sayyed Nasrallah forever shut down those barbaric practices some have adopted to mark Ashura, bringing shame to the creed they claim to belong to.

He said: "What have you done with Ali ibn Abu Talib, and Lady Zaynab [AS], and Imam Hussain [AS] and AhlulBayt? What is this that is happening? Does AhlulBayt want us to [act like] dogs? Does AhlulBayt want us to [act like] dogs? What is the whole point of the story of Karbala? Dignity! Pride! ... They want us to be dignified, with our heads held high. They want us to stand tall. Then there comes some people who want us to go to Karbala and other places, and put chains around our necks, hands, and feet, and make us walk and bark like dogs! What religion is this? What intellect is this? What jurisprudence is this? What sect? And what AhlulBayt?! These are the ones committing the greatest insult."

Sayyed Nasrallah had one more message to the world - that Yemen no longer stands alone before brute desolation, that the nation besieged still have arms to support its stand against wanton murder. "Tomorrow in Ashura we will stand with Yemenis to tell them, we are Yemen, we are the sons of Hussain," Sayyed Nasrallah cried out.

On the Eve of Ashura, it is the return of the Sayyed which was introduced.

No other event in History has echoed across the ages like Karbala has done. Why? Because Karbala speaks to the very nature of our humanity and our reach towards the divine. Imam Hussain [AS] fought not against the tyrant of his time but Evil itself. Our Imam marched onto Karbala with the knowledge that death would be his companion ... not for the ambitioned glory and adulation, but because his duty belonged to the Word and the tradition his grandfather, and father imparted him with.

"Hussain is from me, and I am from Hussain" - Prophet Muhammad