Hillary Clinton capitalized on growing support among independent voters to surge to a five-point national lead against rival Donald Trump barely a month before the US presidential election, a new poll showed Friday. 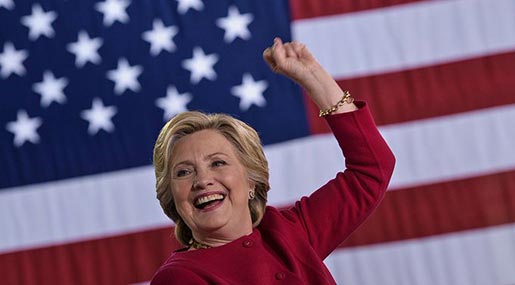 The Democrat improved her standing to 45 percent support compared with 40 percent for her Republican rival Trump in a four-way race that includes lesser-known candidates Gary Johnson and Jill Stein, according to the latest Quinnipiac University poll.

The result shows the former secretary of state extending her lead by four points from last month's Quinnipiac survey, further solidifying the gains that Clinton's campaign has registered since her strong performance against Trump in their first presidential debate on September 26.

In a two-person race, Clinton leads Trump 50 percent to 44.

"With her base of women and non-white voters now solidly behind her and independent voters moving into her column, Donald Trump gets a wake-up call."

The poll of 1,064 likely voters nationwide shows a dramatic shift toward Clinton among those not registered with any party.

Independents now back her 46 percent to 32 percent, compared to 42-35 for Trump in late September.

Clinton stayed off the campaign trail Friday and Trump kept his events to a minimum ahead of their second head-to-head debate, to take place Sunday in St Louis, Missouri.

The Manhattan real estate billionaire is widely believed to have not prepared extensively for their first showdown, while Clinton is known for rigorously studying up before such events.

Sunday's debate will be in the format of a town hall, with questions coming from audience members.

Trump held a town-hall-styled event Thursday night in New Hampshire, but appeared not to treat it like a warmup session.

Trump has routinely charged that Clinton does not have the "stamina" to be president.

"She wants to build up her energy for Sunday night."