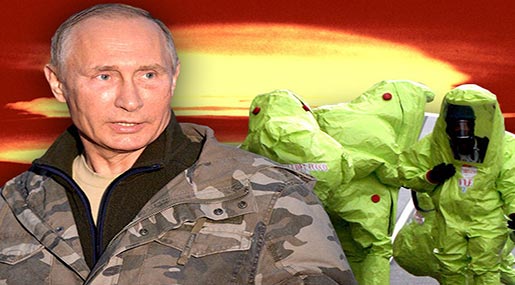 More than 40 million people - almost a third of the country - will take part in the in the unprecedented civil defense exercise from October 4 to 7to prepare Russian citizens from imminent nuclear bombardment.

Russian intelligence sources believe an attack is more likely than it has been for decades. Government and media had begun warning the people to prepare for nuclear Armageddon, after the US explosively announced it was "cutting ties" with Russia regarding the Syrian war.

The Russian Ministry for Civil Defense dubbed the drills involving federal and regional executive authorities and local governments as "Organization of civil defense during large natural and man-caused disasters in the Russian Federation".

However, the ministry does not specify what kind of "man-caused disaster" it envisions.

Oleg Manuilov, director of the Civil Defense Ministry explained that the exercise will be a test of how the population would respond to a "disaster" under an "emergency" situation.

Military and strategic experts had been warning that the Syrian conflict, far from being an isolated war, is actually a World War 3 powder keg waiting to combust.

All of the world's major powers are now active in Syria. With tensions at an all-time high, and American rhetoric sending shivers down Russian spines, Putin is determined to protect his people at all costs.

More than 200,000 specialist rescue units as well the military and paramilitary will be involved in the groundbreaking four-day drill.

"The full force of the Russian emergencies ministry will be utilized" said Sergey Manuilov, director of the Civil Defense Department. It is being coordinated by EMERCOM - the Emergencies Ministry of Russia.

News of the unprecedented drill followed an announcement by Putin's ministers that the government have built enormous nuclear bunkers capable of safely holding all of Moscow's 12 million residents in the event of an attack on Russia's largest city. Every single Muscovite must be protected, Putin commanded before the bunkers were built.

A war between the US and Russia could prove apocalyptic as Russia, with 8,400 warheads, has more nuclear weapons than America's stockpile of 7,500.

Last year, the Russian military unveiled a "Doomsday Plane" that could allow commanders to continue directing the military from the safety of the skies in the event of a nuclear war.

Last week, the Kremlin responded to US State Department spokesman John Kirby's warning that Russian cities could suffer terrorist attacks if Putin continued his military campaign in Syria by taking his "warning" as a veiled threat.

Russian Foreign Ministry spokesperson Maria Zakharova responded by suggesting that Kirby's announcement sounded, "more like a ‘get 'em' command, rather than a diplomatic comment."

Russian Maj. Gen. Igor Konashenkov said the statement by Kirby amounted to "the most frank confession by the US side so far that the whole ‘opposition' ostensibly fighting a ‘civil war' in Syria is a US-controlled international terrorist alliance. What makes Kirby's statement particularly shocking is that the scale of direct US influence on terrorists' activity is global and reaches as far as Russia."