Senior clerics in Bahrain have condemned the Al Khalifa regime for its crackdown on Shia Muslims holding rituals to commemorate the martyrdom anniversary of Imam Hussein [AS], the third Shia Imam and the grandson of Prophet Mohammad [PBUH]. 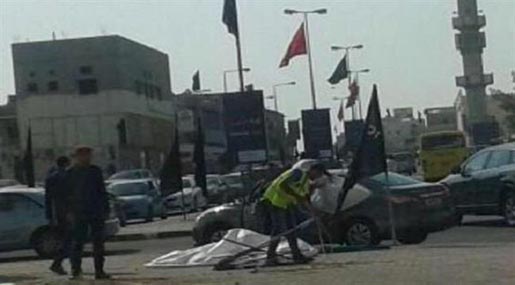 The clergymen, in a statement released on Sunday, denounced the Bahraini regime forces' removal of banners and flags - which had been set up for Ashura, the 10th day of the lunar month of Muharram - as "wrong and cowardly" and "vengeance against opposing opinion."

They argued that attacks on religious rituals undermine "the basics of the religion and nation that have been deep-rooted for hundreds of years."

The religious figures added that Ashura represents "a sacred ritual for [the] Shia," stressing that the Bahraini people "will not abandon their religion and identity to be violated by mercenaries."

The security forces cracking down on people in Bahrain also include individuals deployed from Saudi Arabia and the United Arab Emirates.

The clerics further called on people from different walks of life to "attend Ashura eulogies and processions to defend the religion," and adequately address the Manama regime's repressive moves against Shia Muslims in the kingdom.

On Sunday, clashes erupted between dozens of protesters and regime forces in Abu Saiba after the latter took down Ashura banners and flags and removed black cloths that had draped walls in the village.

Regime forces acted similarly in the villages of Bani Jamra, Qurayya, and Tubli.

Other instances of regime crackdown on dissent include the imprisonment of Shia cleric Sheikh Ali Salman, the revocation of the citizenship of prominent Shia cleric Sheikh Isa Qassem, and banning Shia opposition groups, including al-Wefaq National Islamic Society, al-Risala Islamic Association as well as the Islamic Enlightenment Institution.

A popular uprising has been going on in Bahrain since February 2011. Despite a heavy-handed crackdown, people continue to demonstrate against the regime.

Scores of people had lost their lives and hundreds of others sustained injuries in the crackdown.