In its strategic efforts to acquire naval bases in the Mediterranean, Iran had negotiated a naval exchange deal with Italy to dock its warships in Italian ports. 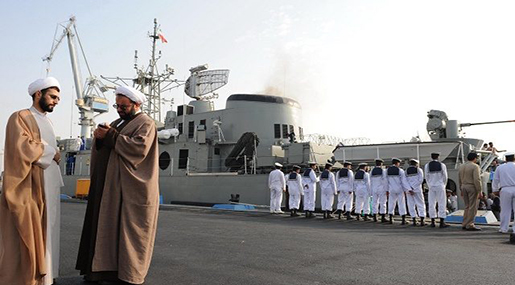 The last time an Italian naval vessel docked in Iranian waters was in April of 2001 with the frigate Bersagliere, and Saturday's visit "indicates a willingness to resume cooperation" between the armed forces of two countries, according to reports in the Italian media.

Leader of the Islamic Revolution His Eminence Imam Sayyed Ali Khamenei expressed his aim of extending Iran's range of operations in the Mediterranean by creating a stable naval fleet presence there, beginning with bases in Syria and Italy. The farthest point the Iranian Navy had reached until now was the Gulf of Aden.

Imam Khamenei reportedly assigned Iran's Navy commander, Rear-Admiral Habibollah Sayyari, to the task, after which Sayyari reached out to Admiral Marcella. The admirals' two meetings in Tehran ended in an agreement "to strengthen bilateral ties."

Moreover, on Monday evening Iran announced that it will hold joint military drills with the Italian navy in the international waters near the southern port city of Bandar Abbas.

The commander of Iran's First Naval Zone, Admiral Amir Hossein Azad, said that the Italian frigate Euro had docked in Bandar Abbas on Saturday and that its servicemen had met with a number of local military and political officials.

The Euro will leave Bandar Abbas on Tuesday, Azad said, after holding joint military drills with two Iranian destroyers and a naval helicopter in open seas.

The Italians' openness to allowing the Iranian naval fleet to use their Mediterranean bases is apparently motivated in part by a reduction in the number of American warships at its ports.

It has been nearly a year since a US naval vessel anchored at an Italian port, and Italy's military command fears that if the United States continues its policy of withdrawing American forces from the Middle East, Italian naval bases will be emptied of warships.

During his visit to Tehran, Rear-Admiral Marcella said that in the future, "we will witness Italian vessels berthing at [Iran's] southern harbors falling within the Iranian Navy's sphere of operation."