The Syrian envoy to the UN, Bashar Jaafari warned that the US lacks the "political will" to "respect the terms of its own agreement," which includes targeting terrorist groups in Syria. 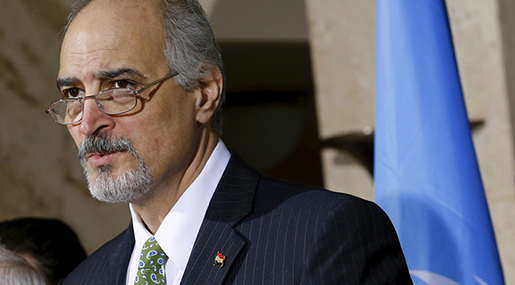 In an interview with RT, the Syrian official said he believes Washington is trying to divert attention away from the US bombing of Syrian troops in Deir ez-Zor and its own failure to uphold the terms of the new ceasefire deal.

"This is nonsense ... American diplomats, as well as military, are trying to justify their wrongdoings in Deir ez-Zor," Jaafari said. "They [the US] are trying to create a parallel between their own big mistake when they bombed Syrian military positions, by pretending that the Russians did the same bombing the humanitarian convoy. Which is not true, by the way, because there are no holes on the ground; the convoy was not bombed."

According to Jaafari, who is the Permanent Representative of the Syrian Arab Republic to the UN, Syria is conducting its own investigation of the convoy attack and will provide its findings to the UN.

Jaafari harshly criticized what he said was a US inability to broker an agreement on Syria which could last. He said US officials have been "pretending that they cannot separate the terrorists of Al-Nusra Front from the other so-called moderate opposition," calling it a lack of "political will."

The "American administration is not a genuine broker and they do not have the will to respect the terms of reference of their own agreement with the Russians. Washington was not even able to respect the terms of reference for seven days," said Jaafari. "This is ridiculous. If you cannot separate these terrorists from those terrorists, then don't pretend that you want to make a secession of hostilities decision."

Jaafari stressed that the Syrians are ready to defend the country against all the militant groups that he says are backed by foreign powers.

"They are coming to kill our own people with Saudi money, Turkish training, American backing, Qatari money, etc. So enough is enough, the mask has fallen and we are fed up," he said. "We are not doing anything wrong, we are defending our country by all the means, legal means."