Not far from the chess game of claims played by the US top officials on the Syrian field, the Pentagon's leaders admitted that they "had no facts" to blame Russia for the Aleppo aid convoy attack. 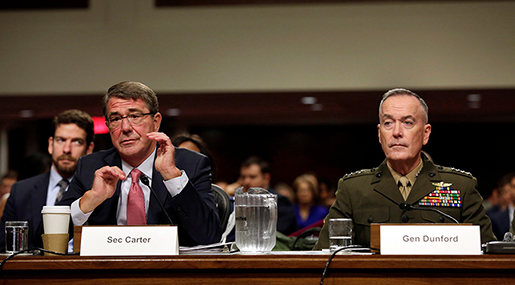 Only US coalition planes should be allowed over Syria, they said, though that would require war against both Syria and Russia.

War Secretary Ash Carter and General Joseph Dunford, Chairman of the Joint Chiefs of Staff, faced the Senate Armed Services Committee on Thursday to report on the ongoing military operations and "national security challenges" faced by the US.

They also asked the senators for more reliable funding, saying the uncertainty was hurting the military industry.

"Not only our people - our defense industry partners, too, need stability and longer-term plans to be as efficient and cutting-edge as we need them to be," Carter told the senators.

The lawmakers were far less interested in the war against Deash [Arabic Acronym for the terrorist "ISIS"/ "ISIL" group] than about the future of the Syrian government, Iran's "malign influence," and "aggression" by China and Russia - all ranked far ahead of terrorism on Carter and Dunford's list of security challenges.

The Pentagon had "no intention" of sharing intelligence with Russia when it came to Syria, Dunford told the lawmakers unequivocally. Secretary Carter explained that the joint implementation councils envisioned by the ceasefire proposal negotiated in Geneva wouldn't share intelligence, just coordinate efforts - but that they were a moot point anyway, since the ceasefire was effectively dead.

"I don't have the facts," Dunford claimed, when asked about the convoy attack by Sen. Richard Blumenthal. "It was either the Russians or the regime," he added.

"There is no doubt in my mind that the Russians are responsible," whether directly or because they backed the government in Damascus, Dunford said, describing the attack as "an unacceptable atrocity."

"There can be no question of grounding US aircraft" over Syria, he said, adding that US jets conduct their strikes "with exceptional precision... that no other country can match."

Sen. Roger Wicker [R-Mississippi] asked about what it would take for the US to impose a no-fly zone over Syria, using the phrase "control the airspace."

"Right now... for us to control all of the airspace in Syria would require us to go to war against Syria and Russia," Dunford replied, drawing a rebuke from committee chairman John McCain, who argued a no-fly zone was possible without war.

Asked about the video of US-backed Syrian militants insulting US Special Forces in al-Rai and running them out of the northern Syrian town, Carter and Dunford shrugged it off.

A "very small minority took verbal action" against US troops, said Dunford, who admitted he did not watch the video but had discussed it with US commanders. He said the incident was "irrelevant" because the US-backed forces and Turkey were making "great progress" along Syria's northern border.