An oil tanker left the Libyan port of Ras Lanuf for Italy early Wednesday with the first crude export cargo from the terminal since at least late 2014, the port manager said. 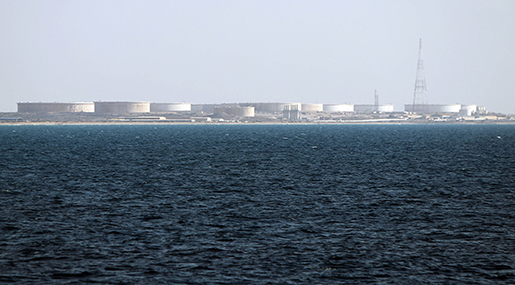 The port manager said a second tanker was preparing to load at Ras Lanuf, one of four ports seized on Sept. 11-12 by eastern Libyan forces loyal to military leader Khalifa Haftar.

Reopening Ras Lanuf for exports is a major advance for the United Nations-backed government in Tripoli as it works to extend its influence to unite rival armed factions and stabilize the economy.

Armed conflict and disputes have left Libya's oil installations under the control of different factions and cut output to about 200,000 barrels per day [bpd] from the 1.6 million bpd it produced before an uprising toppled Muammar Gaddafi in 2011.

Haftar's forces seized the ports from a rival armed group that had controlled them for more than two years.

Though Haftar has so far opposed the UN-backed government in Tripoli, the state-run National Oil Corporation had said it would begin exports immediately and welcomed a promise by his forces to allow the NOC to control the ports.