Amnesty International said Monday a US-made bomb was used in an airstrike on a hospital in Yemen, urging Washington and London to stop supplying the Saudi-led coalition with weapons. 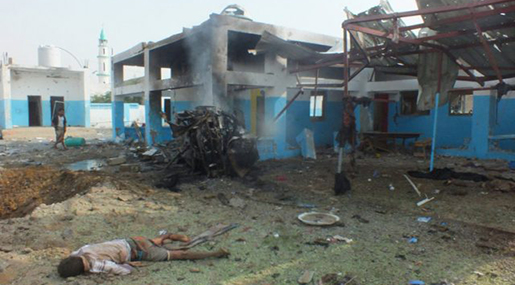 The Aug. 15 attack hit a hospital supported by Doctors without Borders [MSF] at Abs in the rebel-held northern province of Hajja and killed 19 people, including an MSF staffer.

The rights watchdog said a "US-made precision-guided Paveway-series aerial bomb" was used, according to independent experts who assessed photographs of a bomb fin taken at the site.

"It is outrageous that states have continued to supply the Saudi Arabia-led coalition with weapons, including guided and general purpose aerial bombs and combat aircraft," said Amnesty's MENA Research and Advocacy chief Philip Luther.

He said there was "stark evidence that those arms are being used to attack hospitals and other civilian objects and in other serious violations of international humanitarian law."

"This attack highlights, yet again, the desperate need for a comprehensive embargo on all weapons that could be used by any of the warring parties in Yemen and for an international investigation to bring those responsible for unlawful attacks to justice," Luther added.

The coalition which began its campaign against the Yemeni Ansarullah in March 2015 said it had launched an "independent" investigation into "reports" of the airstrike on the Abs hospital.

The coalition has been repeatedly criticized over the civilian death toll in its campaign in support of the government of President Abed-Rabbou Mansour Hadi.

MSF withdrew its staff from six hospitals in northern Yemen after the airstrike.

The UN says the conflict in Yemen has martyred more than 6,600 people, most of them civilians, and displaced at least three million since March 2015.