Sometimes, I suspect, the ability of human beings to fool themselves with their own words over the Middle East is greater than the folly of war. One leads to another. I was crossing the Atlantic when the international crimes against humanity took place on 11 September 2001; my plane turned round over the ocean, shedding tons of fuel, before heading back to the safety of Europe. Safety then, of course. Not now. Before I landed, the third-rate politicians who would lead hundreds of thousands of Arabs - and, comparatively, a few of us - to our deaths in the Middle East had conned us all with their clichés. 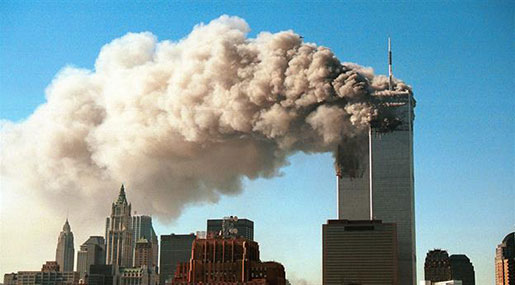 The first of these mischievous remarks was that the attacks of 9/11 "had changed the world forever". Politicians said it, newspaper editorials echoed it, populations repeated this dumb expression by the million. For if we really believed in the "democracy", "values" and "freedoms" of the West which we suddenly rediscovered, it was our duty to ensure that the murderers of 9/11 did not change our societies. Not now - nor ever.

But there was another expression, which I missed at the time. The US was going to launch, we were told, "a world war against terror". It's not the word terror that I failed to spot, a word whose generic, racist use became briefly pardonable after the attacks in New York, Washington and Pennsylvania, and then more disgusting than ever when it was re-used by Bush, Putin and any tin-pot dictator from the Middle East to Far East Asia to further their policies of brutality across the globe.

No, it was the use of the phrase "world war" which I didn't notice.

There were plenty of 9/11 parallels with Pearl Harbour - numerically understandable for that day in 1941, but preposterous in comparison to the mass slaughter of souls which it added to the Armageddon Hitler had already unleashed. No, the real comparison should have been the Great War of 1914-18, which destroyed the European order in a bloodbath which no-one predicted and which led, after 9/11 in our own age to an international outcry against the West's propensity to bomb and bomb and bomb the Middle East.

The parallels, of course, are not exact. But 15 years after the event, I can see that our response to 9/11 had much more in common with August 1914 than September 1939 - or December 1941, if we are going to recall America's entry into the Second World War. In 1914, Europe had lived in a secure world, based upon a balance of power, its populations enriched by the industrialization - and therefore modernization - of transport, health, culture, science, even political understanding. The pre-war "old world" still contained the seedlings of revolution.

But no-one worked out two terrible explosive products within this mutual security pact. When one of these "modern" balances broke down - even over something so piffling as the killing of an archduke in Sarajevo - the rest would automatically collapse. So certain were we of our European security arrangements, that we had no way of preventing a simple disaster when someone blew a fuse in the system. This proved that, far from modernization, we were still in the age of imperial war. The second development which we did not - or refused to - take account of, was that the one product of modernization which would not fail us was war. The machine gun, the trench mortar, long-range artillery and air warfare would indeed "change the world forever".

We may still dispute Britain's need to stand with France - a Brexit from the Entente Cordiale might have changed all that if a referendum had been held just over a hundred years ago - but we can scarcely dispute the unique fury with which we responded to Germany's attack on Belgium and France.

Cries of "Hun barbarism" - or "Boch brutality" - as the Germans stormed into Flanders, supposedly bayonetting babies and crucifying nuns on farm doors, form an immediate parallel to "Islamist terror" and "whoever is not with us is against us".
Oddly, there is another parallel: the 1914 Germans did indeed commit atrocities in Flanders [though not to the extent our propaganda would claim], just as the so-called "Islamists" of bin Laden had committed atrocities before 2001.

The larger historical mirror shows two populations a hundred years apart setting off to war, with declarations of unity and patriotism and a strong hint of national superiority, without the slightest suggestion that the future may be on the side of mass death rather than mass victory. Self-righteousness, however justified, usually leads to the cemetery. Here, perhaps, we should not look back to the First World War, but to the immediate aftermath of 9/11.

For while Europe knew the facts that preceded August 1914, certain truths were kept from ourselves fifteen years ago. We could ask "who" had committed these crimes against humanity [19 men calling themselves Muslims] or "how" [box-cutters, airliners, tall buildings], but anyone who asked "why" [these included myself] were excoriated as "terror lovers", "friends of terrorists", etc.

Any abuse could be uttered to prevent us asking why all the killers were Arabs, whether there was therefore a problem in the Middle East, how had such rage been kindled in a part of the world which had been ruled by our armies and then our pet dictators for the past century - since the end of the First World War, in fact. The identity of the 19 men - 15 of whom were Saudis, as was Osama bin Laden - was morphed into the expression "Arabs", as if the Sunni Muslim, Wahhabi nature of the murderers had nothing to do with their country of nationality.

Thus, too, the final government report on 9/11 crucially excluded the 28 pages - in fact, 29 pages - of evidence about Saudi Arabia's connections to the hijackers. The pages were jealously guarded, for "security" reasons, of course, until this year, when - blow me down - they were released with a few censored passages [or "redacated" as our pusillanimous journalists called them] and revealed only what we have known for a long time: that the Saudis had been funding groups who encouraged the killers.

The "security" label, however, was deadly serious. For if the Saudi identity of the whole operation had been acknowledged from the start, how could the US and the country led by a prime minister whose name I find it difficult to utter, have claimed so imperiously that Saddam Hussein's Iraq - not Saudi Arabia - was behind the destruction of the Twin Towers. The very proposal to go to war in Iraq would have been highly questionable if we had absorbed the information contained in the censored passage of the 9/11 report. That - and that alone - was why the report was so important. It was tampered with so that we would attack Iraq and leave our Saudi allies in peace.

No wonder the Muslim response on this fifteenth anniversary of 9/11 has been so indifferent. Iran and Lebanon were among the first nations to offer their condolences in 2001. But I am struck by the words of a Pakistani doctor a few days ago. "It's a non-event," she said, "when they see the damage the Americans have done in the Arab-Muslim countries, the 11 September is the last of their worries - and not because they support terrorism."

Exactly. And just as the Great War led to the Second, so the "world war" against al-Qaeda led, via Iraq, to the "war" against the "apocalyptic" ISIS/ISIL/Daesh - the extraordinary word of the US Joint Chiefs of Staff. We did try to stop history. Brits marched against Blair's murderous attack on Iraq before it began. But off we went. Forget Afghanistan - a good war, hadn't we defeated the Taliban? - And let's head for Baghdad for part two of the "Great War".

It was folksy stuff. Secluded far from Washington after 9/11, George W Bush demanded to return to the White House. He asked after his wife and two daughters. Assured that they were safe, he asked: "And Barney?" Barney was the family dog. And from that moment, we all were.