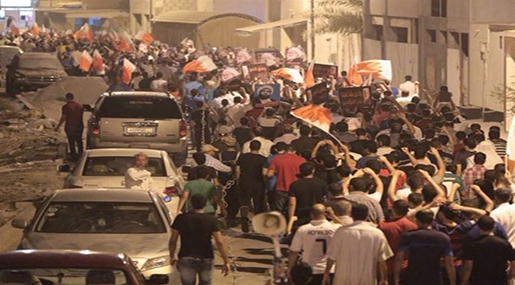 Bahraini activists reported several sit-ins and protests around the country, despite a number of threats from the Al Khalifa regime.

The demonstrators are protesting the unjust trial of Sheikh Qassem that is being conducted by the Al Khalifa regime in response to his outspoken criticism of their brutal policies.

The Al Khalifa regime has stripped Sheikh Qassem of his citizenship, which has become a common practice for suppressing their critics.

Anti-regime protesters have been holding demonstrations on the streets of Bahrain since mid-February 2011, calling on the Al Khalifah family to relinquish power.

The ongoing heavy-handed crackdown on peaceful demonstrations had left scores of people dead and hundreds injured, and many more behind bars.