Qatar mobilized a contingent of 1,000 army soldiers to support invasion of the Saudi-led coalition on Yemen after four Qatari soldiers were killed by Yemeni popular forces, media sources said. 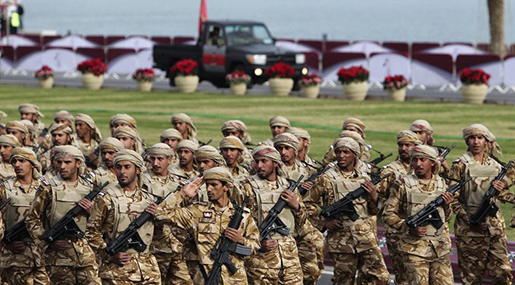 According to al-Jazeera news, "The troops are now reportedly heading to Yemen's Maarib province, to join the Saudi-led coalition already fighting in the area."

And more Qatari servicemen will be deployed to Yemen in the near future, the report added.

The reason for the influx of Qatari soldiers is still unknown, as Qatari official had not yet published any statement on the development.

However, the mobilization of the Qatari troops is likely to do with loss of several Qatari military personnel working with Saudi-led coalition.

Qatari state media had reported three Qatari members of a Gulf Arab military coalition had been killed during operations in Yemen, their country's highest single death toll in the 18-month conflict.

The soldiers died on Monday, state news agency QNA said, without giving any information on how or where they died.