Turkish police Friday fired tear gas and water cannon on hundreds of demonstrators in the Kurdish-majority southeast protesting against the suspension of over 10,000 teachers for suspected links to militants, an AFP journalist reported. 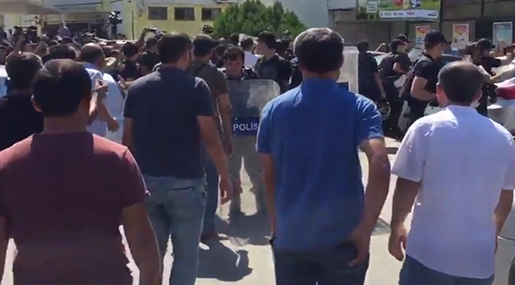 Around 200 protesters, including affected teachers, gathered in front of the education directorate in Diyarbakir, whistling and shouting slogans, in protest of the suspensions which targeted educators mainly from the region.

"We will win by resisting!" and "Shoulder to shoulder against fascism!" the group shouted.

The police called the demonstration "illegal" and urged protesters to disperse before using tear gas and water cannon when the group kept on their protest across the road.

At least 30 protesters were detained by police, the AFP journalist said.

Turkey Thursday suspended 11,500 teachers suspected by the education ministry of having engaged in activities in support of the outlawed Kurdistan Workers' Party [PKK] listed as a terror group by Ankara and its Western allies.

A Turkish official said the teachers were placed on paid leave until a formal investigation was concluded.

The suspension came just over a week before the new school year gets underway in Turkey.

The number of suspended teachers was expected to climb to 14,000 -- a figure first pronounced by Prime Minister Binali Yildirim during a key visit to Diyarbakir last weekend. There are 850,000 teachers in Turkey.

The Turkish military had waged a relentless offensive against the PKK in the southeast and in northern Iraq, after the rupture of a ceasefire last year.

Tens of thousands of people have been killed since the PKK first took up arms in 1984 with the aim of carving out an independent state for Turkey's Kurdish minority.