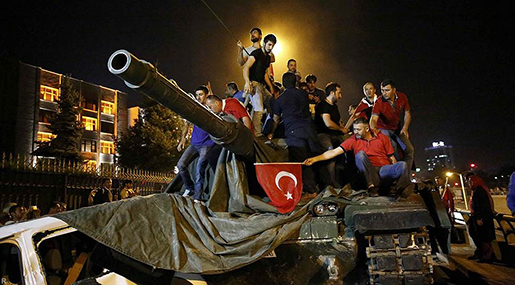 An Ankara court remanded Gurcan Balik, Ali Findik and Tuncay Babali in custody ahead of trial over suspected links to the US-based preacher Fethullah Gulen who is accused of masterminding the coup, the state-run Anadolu news agency said.

Balik is a prominent figure who was the chief foreign policy advisor to Gul, who served as president from 2007 to 2014 before handing over to Recep Tayyip Erdogan.

He had also worked as an advisor to former Prime Minister Ahmet Davutoglu during his long stint as foreign minister.

In that role, Balik in 2013 set up a hugely controversial meeting between Davutoglu and Gulen while the then foreign minister was attending the UN General Assembly in New York, Anadolu said.

Davutoglu in May 2015 confirmed he had secretly visited Gulen for talks at his Pennsylvania compound aimed at persuading him to return to Turkey to ease tensions in the bureaucracy.

He has insisted both Gul and Erdogan, then prime minister, were aware of the visit.

Turkey had embarked on an all-out purge of state institutions in the wake of the coup to rid the country of what Erdogan calls the "virus" of Gulen's influence.

The arrest of Balik is significant as it represents one of the first times a figure linked to the political leadership in the ruling Justice and Development Party [AKP] has been implicated in the coup.

There had never been any suggestion of wrongdoing on the part of Gul and Davutoglu and both condemned the coup in the strongest possible terms.

According to Anadolu, the foreign ministry fired 88 people in the wake of the coup. Almost 70,000 civil servants have been dismissed in total, over half of them in the education sector.