Germany is on high terror alert following another round of attacks that shocked the country leading Germany to urge citizens to stockpile resources for the first time since the Cold War. 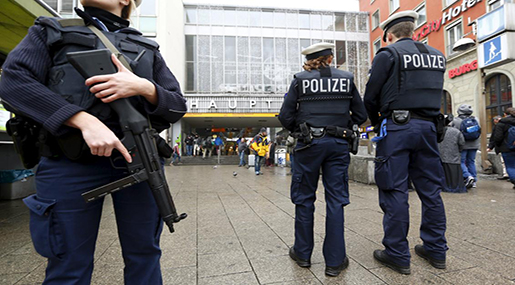 The German government plans to tell citizens to stockpile food and water in case of a catastrophic terror attack the Frankfurther Allgemeine Sonntagszeitung newspaper reported on Sunday as the country finds itself in high alert after two terrorists attacks and a shooting rampage by a mentally unstable teenager last month.

The country also has announced plans to allocate a considerable sum of additional resources to police and security forces to create a special cybercrime and terrorism unit.

In the shocking news, the newspaper quoted a report by the German Interior Minister, titled "Concept for Civil Defense" as saying that "the population will be obliged to hold an individual supply of food for ten days."

A spokesman for the Interior Ministry noted that the plan is to be discussed by Chancellor Angela Merkel's cabinet on Wednesday before being presented by the minister that afternoon, but declined to provide additional comment on the matter.

According to the plan, the German people are called upon to stockpile enough drinking water to last for five days as a precautionary measure against the scourge of extremist terrorism.

People should "prepare appropriately for a development that could threaten our existence and cannot be categorically ruled out in the future," the report stated.

The disturbing call for civilian resource stockpiling comes on the heels of the German Defense Minister saying earlier this month that Germany now finds itself in the "crosshairs of terrorism" before calling on the security forces to train closely with police to prepare for a large-scale terror strike.

The demand upon the German people to stockpile resources has not been traced, per the German government, to any explicitly known catastrophic terror threat that would compromise the civilian infrastructure for a period of one week or longer but will certainly be used as ammunition by opponents to Chancellor Angela Merkel's open door policy regarding Syrian refugees.

In 2015 alone, Germany welcomed more than 1 million refugees, primarily those fleeing the Syrian war zone, and have seen as much of Europe a corresponding increase in the number of terror attacks.