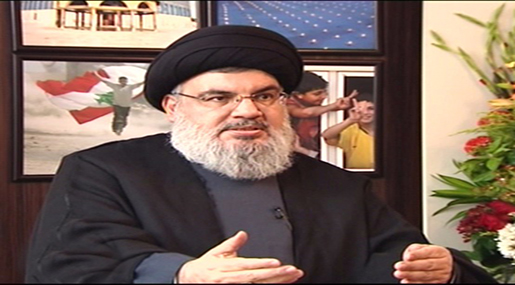 Speaking in an exclusive interview with al-Manar TV on Friday evening, Sayyed Nasrallah said he is "confident" that Hizbullah "would emerge victorious from any new war with "Israel"."

"After the [2006] war, I visited the Bekaa Valley and southern Lebanon. They ["Israelis"] say their achievement is that they forced me to hide in a bunker. That's not true; I've met with many people away from the spotlight. I live and get around in a natural way. I do not live in a bunker," Sayyed Nasrallah added.

He further stated that the missiles Hizbullah fired against the "Israeli" entity during the 2006 war came from the Syrian military industry, and they were not manufactured in Iran.

"The war was aimed at eliminating the resistance in Lebanon, Syria and Palestine, and eventually isolating Iran. What is happening in Syria is a form of revenge for that war," he said, referring to the foreign-backed militancy against the Syrian government.

"The "Israelis" knew that a direct military confrontation would not lead to Hizbullah's defeat and that a war with Iran was not helpful. That is why they chose to take out Syria from the axis of resistance," Sayyed Nasrallah added.

He said some parties in Lebanon "tried to confine the Lebanese army" during the 2006 war.

Sayyed Nasrallah reiterated Hizbullah's commitment to Lebanon's national unity and the formation of a government that included all Lebanese political parties and factions, including the Future Movement.

Earlier, on the occasion of the 10th anniversary of Lebanon's victory against "Israel" in the 33-day war last Saturday, Sayyed Nasrallah stressed that the "Israeli" military was shaken after 2006, noting that generals in the "Israeli" military began to accuse each other of various faults after the defeat in the war.