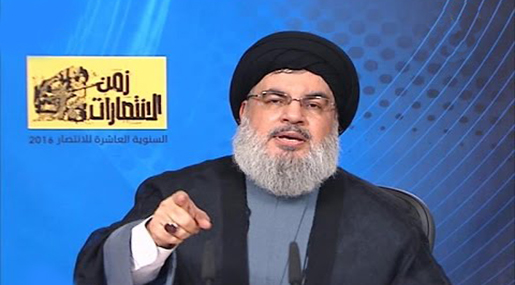 He further asserted that July Victory reasserted that "Israel" is more fragile than a spider web and that its destiny is to be wiped from existence soon.

As Sayyed Nasrallah confirmed that the choice of Hizbullah is to be in Aleppo, he warned the Takfiri groups that they are being exploited by the USA and "Israel", calling on them to stop the fight.

On the internal level, the Resistance Leader noted that General Michal Aoun is Hizbullah's candidate for presidency, asserting that Speaker Nabih Berri is the party's old new nominee for this post.

In his speech marking the 10th Anniversary of the Divine victory, Sayyed Nasrallah welcomed the people's presence in Bint Jbeil, the city of victories.

On the event of the celebration, Sayyed Nasrallah hailed all those who resisted, helped, and contributed to this Divine victory as well as the countries which supported Lebanon during the war, expressing his disappointment as the "Israelis" showed more interest in "Lebanon's War II" than the Lebanese as he noted that some internal sides even try continuously to absentthe memory of July War from the minds of the Lebanese.

Comparing it to the Saudi War on Yemen, Sayyed Nasrallah said that the aggression on Lebanon was a US decision executed by "Israel", adding that the flop of the goals of the war was a historic achievement.

Listing the "Israeli" goals behind this war which the "Israelis" gradually diminished, the Resistance Leader said that the major goal was the scheme of the Neo Middle East that was announced by the then US Secretary of State Condoleezza Rice.

Moving to the repercussions of the war on the "Israeli" internal, Sayyed Nasrallah said the "Israeli" military institutions were shaken after this war as well as the confidence of the "Israelis" masses in the army and its ability to put a quick end to any battle.

"July War toppled the 'Israeli' military doctrine which was formulated by Ben-Gurion since the establishment of the entity,"Sayyed Nasrallah said adding that now the Israelis are working on a new military doctrine as they now believe in all what the Resistance says and is being verified by facts on the ground.

Asserting that after July War "Israel" fell into a totally different state of incertitude, His Eminence said that since July 2006, "Israel" lowered the ceiling of its true implicitaspirations,and the question of the very existence of "Israel" floated.

As "Israel" now absolutely believes in Hizbullah's deterrence ability, His Eminence stated that some studies in the USA say that the future of "Israel" is not long anymore.

Sayyed Nasrallah announced: "The number one man in ‘Israel', Benjamin Netanyahu, talks about calmness opposite to calmness at a time there is no peace agreement with Lebanon, but this is a result of the deterrence equation that was consecrated during July War."

Emphasizing this point, Sayyed Nasrallah highlighted: "The current ‘Israeli' president says that if the next war was imposed on us, "Israel" will emerge from it, and it will not have another date... So the ‘Israeli' enemy is aware that the next war will be the last war because if it loses, there will be no existence for ‘Israel'."

Moving to the situation in the region, Sayyed Nasrallah called on the Lebanese to follow the US statements on the US confessions on its responsibility of founding, funding, and supporting "Daesh".

Highlighting the reason behind founding Daesh, Sayyed Nasrallah said, "The US founded‘Daesh' to hit the axis of the Resistance and specifically Hizbullah; not because Hizbullah is more important than Syria and Iran but because it is the spearhead which is present in the field and fought and is fighting on the forefront lines."

However, His Eminence further said that now that the role of these terrorist groups came to an end, it is due time to exterminate them. In this perspective, the Resistance Leader said: "Now ‘Daesh' is the major card exploited in the US presidential elections."

On the tenth anniversary of the divine victory, Sayyed Nasrallah made an address to the armed groups fighting in Syria, Iraq, Yemen, and Libya: "If you still hear and have a mind, I tell you that you were exploited for five years to demolish the Axis of the Resistance, the peoples in the region, and the aspirations of the region to establish instead weak collaborating regimes that succumb to the USA and "Israel".

If you still have anything of Islam, any love to the Prophet, and any relation with the Quran, stop this fighting on behalf of the USA in the region".

His Eminence wrapped this section of his speech asserting that "our choice is to remain present in Aleppo and in all the fighting squares and to assume our responsibilities despite the ongoing intimidations. For Palestine, the prisoners of Palestine, and Syria, Iraq, Bahrain, Yemen, and the region, we call for awareness."

On the internal situation, the Leader of the Resistance asserted that the party's commitment to General Aoun to the presidency was made back before July War. In a parallel line, he said: "The party is open and positive on any talks on forming a government after the president is being elected."

On another local file, Sayyed Nasrallah highlighted that there is a political decision to cripple the oil file - a potential funding source to the Lebanese Treasury -, hoping that this decision is solely local and not a US-"Israeli" decision.

On the eve of the 31st of August, Sayyed Nasrallahrecalled Imam Sayyed Mussa Sadr, the Imam of the nation, the Imam of the Resistance, and the owner of historic awareness, saying that this is why they conspired against him.

Highlighting that the Resistance fighters are the pupils and followers of this Imam who will move along on his steps, Sayyed Nasrallah, from Bint Jbeil, also hailed the fatherly supportive stances of late Sayyed Mohammad Hussein Fadlallahespecially during July War when he referred to the resistance fighters as the companions of the Prophet (Peace be upon him and his Household) who fought in the battle of Badre.

Evading mentioning the martyrs of July War though he has the honor to articulate their names, Sayyed Nasrallah wrapped his speech emphasizing that this war put the Resistance between the two very choices Imam Hussein was put before on the tenth of Muharram: War and humiliation.

According to His Eminence: "Only then, we felt a sense of the essence and the spirit of this phrase which we used to hear in Husseini councils since our childhood. As followers of this Great Imam, our answer was his: Humiliation, how remote! Since then, this is our slogan.

I tell all those who conspire against us and try to shake our confidence in Allah, our people, and our abilities: We ushered into the time of victories. The scheme of Daesh is collapsing, and the future of the region is resistance, dignity, and sovereignty."