The icy relationship between Russia and Turkey is warming up. 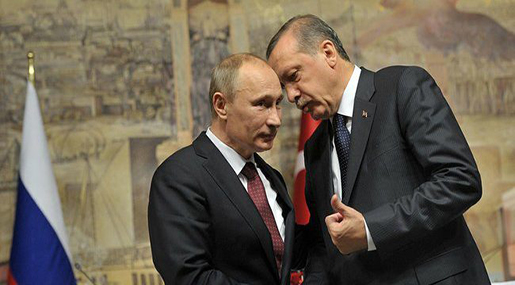 A meeting between Vladimir Putin and Recep Tayyip Erdogan on August 9 in Saint Petersburg is the first since the downing of a Russian fighter jet and the subsequent murder of its pilot in November of last year.

It took eight months for Erdogan to send a letter of apology, which he did earlier this June, with the word "sorry" spelled out in Russian - as reported by Moscow media outlets.

That was more than enough to open new diplomatic channels between the two countries, which share extensive common interests, but also a number of unresolved issues that will require compromise and complex political maneuvers.

The two key issues are Syria and NATO.

If Moscow and Ankara succeed in finding common ground in the aforementioned areas, the geopolitical configuration of the entire Eurasian continent - and with it, the entire world - would be altered.

Enough optimism has been expressed from both sides in recent weeks over future Turkish-Russian ties. That optimism extended to what most consider to be a relatively unrealistic prospect of Ankara simply "leaving" NATO and turning its back on Washington (translation: embracing Russia and China).

But if a Turkey-NATO split is theoretically possible, and perhaps even likely - which could very well be the case, given the current state of affairs - it comes with a mountain of preconditions, as well as overcoming threats and armed conflict scenarios in both Turkey and Russia.

The first of these obstacles has been overcome with the meeting between the two presidents, described as a two-hour, man-to-man affair.

Putin kicked off the meeting with a dose of confusion, receiving the Turkish head of state in the Greek Hall of St. Petersburg's Constantine Palace. He also wore a fully black necktie, as if in mourning.

This was certainly a message, with the tragic death of the Russian pilot almost a year earlier in mind.

Back then, Oleg Peshkov's murder was attributed to Turkmen militants operating in northern Syria and are loyal to Erdogan's regime.

That narrative was altered following the failed, June 15 coup attempt in Turkey, at which point Erdogan and his subordinates blamed the shooting down of the Russian aircraft on the exiled Turkish preacher, Fethullah Gülen. Indeed, the post-coup media narrative in Turkey openly blamed Gülen and his Washington sponsors for the armed rebellion.

If these accusations are even remotely true, Erdogan has nothing to lose by improving relations with the Russians, and has everything to gain - first and foremost, his life, both physically and politically speaking.

In some ways, the Turkish leader already symbolically demonstrated as much by wearing a pink tie to his meeting with Putin and greeting the Russian president with the words, "my friend Vladimir".

Erdogan's Russian "friend" did not return the sentiment, avoiding the use of such gestures altogether.

Instead, in a somewhat discreet and gentle, yet noticeable manner, Putin created a space between Erdogan and himself, sending a very clear message to Ankara that a lot more needed to be done for Turkey to regain its status of a trustworthy Kremlin partner.

One of the conclusions that can be drawn from the manner of this encounter is that both Putin and - to a lesser extent - Erdogan did not wish to put on a display of ‘closeness', hoping to avoid further irritating the west.

If the end game of this complex maneuver really is Turkey's exit from NATO, it would be unwise to provoke Washington into speeding up and strengthening radical measures against an unreliable ‘NATO ally'.

However, those who dream of a speedy U-turn on the part of Ankara have to take into account the vast American military presence in Turkey, which includes thousands of soldiers, modern military technology, as well as an unknown number of nuclear warheads. That kind of military muscle is not so easy to remove, especially given its decades-long presence.

The Putin-Erdogan meeting should be examined with the words of the Russian President in mind: "restarting dialogue" and "restoring relations".

This means that Russia and Turkey are starting over with the basics, including the return of Turkish companies to the Russian market, the resumption of food exports and other articles, and the return of Russian tourists to Turkey. Before all else, there must be a resumption of trade, which once stood at US$30 billion annually, and has now been reduced by almost 75%.

If the two countries realize Erdogan's dream of "US$100 billion annually" in trade, Ankara will no longer need NATO or the European Union.

But this is still just a dream.

Erdogan, who thanked Putin for being among the first to call him following the failed coup-attempt, was also concrete in his promises for future cooperation.

"We will undertake the necessary steps to ensure the export of Russian natural gas into Europe," said Erdogan in reference to the construction of the natural gas ‘Turkish Stream' pipeline.

Only one day before meeting with Erdogan, Putin attended a conference in Baku, along with Azerbaijan's President Ilham Aliyev and Iran's Sheikh Hassan Rouhani.

This historic gathering led Russian experts to conclude that the three countries (Russia, Iran and Azerbaijan) are creating a "natural gas cartel", which includes enormous infrastructural projects for the energy and transportation sectors.

In addition, the project reportedly involves the construction of a water corridor stretching from the Persian Gulf to the Baltic Sea, essentially serving as a net of natural gas routes that would be used to supply Europe, China and India.

This ambitious plan gains a much more realistic dimension with the inclusion of one more key player - Turkey.

Erdogan hosted the Iranian Foreign Minister Mohammad Javad Zarif shortly after his Moscow trip, suggesting that Turkey's integration into this project is moving full-steam ahead.

Tehran-based political analyst, Fouad Izadi agrees. "Turkey can be used to transport Iranian natural gas to Europe and other places," he says.

At the same time, however, attempts to derail the realization of Putin's vision of a Eurasian alliance appear to be just as prompt. The recent spike in tensions in Ukraine suggests that NATO assets are already being mobilized to attack Crimea, which houses Russia's Black Sea Fleet. Russian naval bases in Crimea would be crucial in providing security for the ‘Turkish Stream' pipeline.

The precondition for any long-term agreements is Syria

The precondition for a fruitful, long-term Russian-Turkish relationship is a resolution to the conflict in Syria.

At a time when the battle for Aleppo embodies the struggle between pro-Russian and pro-Turkish forces - with the west planting the seeds of hate - it is clear that the conflict can only be resolved at the expense or, rather, gain of both sides. This also has to include a simultaneous expulsion of the Americans and their Persian Gulf Arab allies from the game.

This formula may have a lot of unknowns, but is realistic and possible to implement. In fact, traces of a resolution acceptable to both Moscow and Ankara are already beginning to appear.

"Turkey is moving towards a change in policy. We used to have a time when the Turkish border was an open area for Daesh [Arabic acronym for "ISIS" / "ISIL"] coming into Syria, supported by Turkish intelligence agencies. Now we have a situation where the Turkish government is realizing that some of its polices were unsustainable," opines Izadi.

At this point in time, it is precisely Turkey's possible change in policy towards Syria, which is dreaded by the west, and not so much Turkey's exit from NATO.

In short, this new approach consists of a creation of a Turkish-Russian condominium for Syria, where some of the war-torn country's northern, Turkmen-majority regions would fall under Ankara's "influence", which would include a military component.

Meanwhile, a military alliance comprising Turkey, Russia, Syria and Lebanon's Hizbullah would focus on ridding Syria of the most extremist elements. This would in turn eliminate the western influence to a large extent, helping to calm the entire region by beating back the main source of instability.

The formula also addresses the issue of the Kurds, who stand to lose the support of Moscow and Damascus, which would represent a huge victory for Erdogan. Of course, neither Moscow nor Damascus would shed a lot of tears over the Kurds, who see Washington as their main benefactor, and actively support the American plan for the federalization of Syria.

Erdogan's possible U-turn on Syria would signal his readiness to jump into the Russian camp with both feet. That will be a moment when all options will be on the table for everyone involved - from military coups, assassinations, to threats of civil war and the break-up of Turkey.

Putin knows this full well. So, perhaps his black tie is also a sign of the tragedies yet to unfold.

Anyone who believes that the US will give up a key asset on the world's most important frontline without a fight is clearly not taking into account that this would mean death to America's interventionist ideology, which has served as Washington's defining characteristic for decades.

This is why all roads leading toward a Turkish-Russian alliance will be peppered with thorns rather than rose petals.