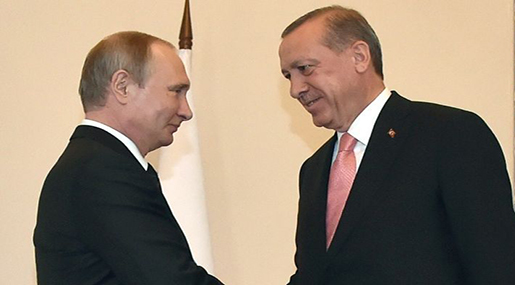 Erdogan's visit to Putin's hometown of Saint Petersburg is also his first foreign trip since the failed coup against him last month that sparked a purge of opponents and cast a shadow over Turkey's relations with the West.

"We lived through a very complicated moment in the relations between our states and we very much want to overcome the difficulties," Putin told journalists at a joint press conference.

He insisted it would take "painstaking work" and "some time" to return to previous trade levels as Russia rolls back punishing economic sanctions against Ankara, but both sides said they wanted to restart major energy projects hit by the crisis.

Erdogan said he hoped relations would become "more robust" and stressed how important it was that Putin offered his support after the coup.

"We will bring our relations back to the old level and even beyond," he said.

The shooting down of a Russian fighter jet by a Turkish F-16 on the Syrian border last November saw Putin slap sanctions on Turkey and launch a blistering war of words that dealt serious damage to burgeoning ties.

But in a shock reversal in late June, Putin accepted a letter from Erdogan expressing regret over the incident as an apology.

Now in the wake of the failed July 15 coup attempt, there are fears in Western capitals that NATO-member Turkey could draw even closer to Moscow - with Erdogan bluntly making it clear he feels let down by the United States and the European Union.