In an overnight raid, Pakistani forces captured Abu Zubaydah, allegedly a recruiter for the terror group and a member of Osama bin Laden's inner circle. 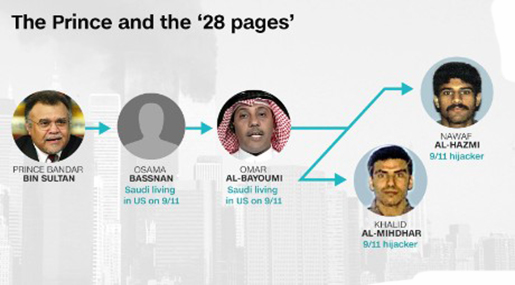 Now, 14 years after Zubaydah was apprehended, newly declassified information from a 2002 congressional report on the 9/11 attacks, dubbed the "28 pages," reveals an indirect link previously hidden from the American public between the alleged al-Qaeda operative and a company associated with a key member of the Saudi royal family, former Saudi Ambassador to the United States Prince Bandar bin Sultan.

Ever since 19 men -- 15 of them Saudi nationals -- hijacked four airplanes and changed the course of American history, the possibility of official Saudi involvement has hung over the relationship between the two countries. While the alleged association with Bandar revealed in the newly declassified pages does not provide direct evidence the prince was complicit in the 9/11 attacks, it raises new questions about Saudi Arabia's involvement.

The connection to Bandar was made through Zubaydah's phone book, retrieved during the Pakistani raid in which he was taken. In it, the FBI found numbers linked to the United States, including an unlisted number for a company that managed Bandar's estate in Aspen, Colorado. An unlisted number was also found for a bodyguard who worked at the Saudi Embassy in Washington.

"Both of those numbers were unpublished, so they had to have gotten into Zubaydah's phone book through a personal contact who knew what those numbers were and what they represented," said former Sen. Bob Graham, co-chair of the congressional commission that compiled the 28 pages.

The revelation about Bandar's indirect ties to the al-Qaeda operative was one of the few pieces of new information contained in the declassified documents.

The CIA and FBI concluded that there was no evidence anyone from the Saudi royal family knowingly provided support for the 9/11 attacks.

But Graham said the indirect connection to the respected former Saudi ambassador was "one of the most stunning parts of the investigation" and worthy of pursuing further.

Bandar was the Saudi ambassador to the United States from 1983 to 2005, during the Ronald Reagan, George H. W. Bush, Bill Clinton and George W. Bush administrations. He later served as secretary general of Saudi Arabia's National Security Council and head of Saudi Arabia's General Intelligence Presidency, the equivalent of the CIA, until last year.

Bandar "is probably the most effective ambassador in Washington ever. Full stop," said former CIA analyst Bruce Riedel. "He was highly regarded by every president."

The key Saudi royal figure was known to have the closest relationship with George H. W. Bush, because of Iraq's invasion of Kuwait in the 1990 Gulf War. Saudi Arabia viewed the Iraqi aggression as a threat and supported the subsequent US military action.

"Bandar was in the Bush White House I would say every other day and in some periods every day. It was a very, very close relationship," said Riedel. "And I think the President and Bandar genuinely liked each other."

Trying to connect the dots

The so-called 28 pages were the only part of the initial congressional investigation into the September 11 attacks -- officially named the Joint Inquiry since both chambers participated -- that had not been made public before their declassification in July.

Actually numbering 29 pages, they detail a web of Saudi nationals living in the United States who may have aided the 9/11 hijackers. The George W. Bush administration deemed their publication a threat to "national security" and kept them confidential.

That designation was for more than a decade a bone of contention for family members of 9/11 victims and others who thought the pages might contain more details showing Saudi participation in the terror plot. After continuous pressure, the Obama administration agreed to make the pages public last month.

During the decade-plus they remained classified, Congress established the 9/11 Commission to devote more time and resources to investigate the questions raised by the Joint Inquiry -- such as what the nature and extent of the Bandar tie was -- because the inquiry was by no means exhaustive. The 9/11 Commission's book-length findings were published in 2004 and found "no evidence that the Saudi government as an institution or senior Saudi officials individually funded" al-Qaeda.

The FBI investigated the phone numbers indirectly linked to Bandar in the summer and fall of 2002. A CIA-FBI investigation concluded in 2005 that there was "no evidence that either the Saudi government or a member of the Saudi royal family knowingly provided support" for the September 11 attacks or "had foreknowledge of terrorist operations in the kingdom or elsewhere," according to an executive summary of the findings, which were released on the same day as the 28 pages.

The FBI would not comment for this story concerning those investigations.

The Saudi Embassy did not respond to CNN's request for comment on the questions raised in the 28 pages regarding Bandar. A public relations firm that handles press for the embassy referred CNN to the findings of the 9/11 Commission and the 2005 joint CIA-FBI memo.

However, the 9/11 Commission report and the joint agency memo only offer blanket absolution of official Saudi involvement and do not reference the questions detailed in the 28 pages surrounding the phone numbers that indirectly seem to link Bandar to al-Qaeda.

The 28 pages also raise questions about another possible link between Bandar and the attacks: the prince's relationship with a Saudi national named Osama Bassnan, who was living in the United States on 9/11 and was investigated to determine if he helped two of the 9/11 hijackers. The declassified pages reveal previously undisclosed amounts of money that Bandar and his wife sent to the man's family.

Bassnan, a former employee of the Saudi government's Educational Mission in Washington, according to a 9/11 Commission document that cited information obtained by the FBI, lived across the street from two of the 9/11 hijackers in San Diego: Nawaf al Hazmi and Khalid al Mihdhar. Hazmi and Mihdhar were on the plane that crashed American Airlines Flight 77 into the Pentagon.

According to the same 9/11 Commission document, Bassnan admitted to an FBI asset that he met Hazmi and Mihdhar while the hijackers were in San Diego, then denied this in a subsequent conversation. There was some evidence that Bassnan may have had closer ties to the hijackers, though the FBI was not able to corroborate it.

Bassnan's wife, meanwhile, received tens of thousands of dollars in monthly stipends from a Saudi charity run by Bandar's wife, Princess Haifa al-Faisal. Bassnan's wife was allegedly receiving the money as an allowance for "nursing services," according to the 28 pages. The inquiry indicated it doubted that was what the payments were really for, though Bassnan repeatedly spoke of his wife's "health problems" during interviews with investigators.

A former employee at the Saudi Embassy said that such financial arrangements were not unusual.

"It is very common for the government to help Saudi citizens, certainly in terms of providing medical assistance or support while they are abroad," said Fahad Nazer, a scholar at the Arab Gulf States Institute and a political analyst at the Saudi Embassy while Bandar was the ambassador.

Bandar was known to give "a lot of money to charity," according to Riedel and "was pretty notorious for lavish spending."

"He gave some of the best parties Washington probably has ever had," Riedel said.

The 9/11 Commission report, which does not mention the details of the donations, looked at whether the money from Bandar and his wife's charity was passed on to the hijackers but found "no evidence" that it had.

Still, the FBI determined that at least some of the checks meant for Bassnan's wife changed hands and were given to the wife of another Saudi man living in the United States, Omar al Bayoumi, who had direct ties to Hazmi and Mihdhar. Bayoumi helped the hijackers settle in San Diego when they arrived in the country around early 2000 by finding them an apartment and even co-signing their lease.

"Bayoumi's wife attempted to deposit three of the checks from Bandar's wife, which were payable to Bassnan's wife, into her own accounts," according to a passage from the 28 pages.

Despite Bayoumi's association with the hijackers, the FBI determined in 2004 that Bayoumi did not have "advance knowledge of the terrorist attacks" or "knowledge of al-Hazmi's and/or al-Mihdhar's status as al-Qaeda operatives" or that "the assistance provided by al-Bayoumi to al-Hazmi and al-Mihdhar was wittingly."
Could there be more to the story?

The allegations against Bandar and the other Saudi nationals in the 2002 Joint Inquiry were not meant to be "final determinations" on connections to the Saudi government, according to the report, which states it is "possible that further investigation of these allegations could reveal legitimate, and innocent, explanations for these associations."

The 9/11 Commission report, which found no evidence of Saudi involvement in the plot, is viewed by the US government as the definitive investigation of the attacks.

"I don't see on the basis of anything we have now that we should change those judgments," Riedel said, referring to the 28 pages and Bandar's mention in them.

"He had tremendous access to the White House. He had access to the CIA, Department of Justice, the Hill, media," Riedel said. "I just find it stretches credulity that he would somehow be involved in a plot to attack the United States of America."

Bandar enjoyed American culture while he was living in the United States, according to Riedel, including being an avid Dallas Cowboys and McDonalds fan.

"He used to go to a lot of games in Dallas. He is an avid McDonalds Big Mac fan. He often would order a Big Mac to be delivered to his residence in McLean, Virginia," said Riedel. "What's more American than the Dallas Cowboys and Big Macs?"

While the clues found in Zubaydah's notebook seemingly never led to damning evidence tying the Saudi prince to al-Qaeda, Bandar's name was mentioned again in 2014 when Zacarias Moussaoui, thought to be the 20th hijacker, claimed that Bandar was in an al-Qaeda donor database.

Moussaoui, who pleaded guilty in 2005 to six terror related charges, said he was tasked by Osama bin Laden with creating a digital database cataloging al-Qaeda's donors. He made the allegations in a sworn statement contained in a brief submitted as part of an ongoing case in US courts by the families of 9/11 victims against Saudi Arabia.

Graham, the former senator that pushed to have the 28 pages declassified, thinks there's enough to justify a closer look. Graham now wants the FBI and CIA documents pertaining to the questions raised in the 28 pages to be released as well.

"It's going to now be the task to find out, did the ... (9/11) commission, did the FBI, did the CIA, or any other entity of the United States government in fact do" a comprehensive inquiry into the Bandar connection?" Graham asked. "If so, what did they conclude in their further investigation?"