The perpetrators of recent attacks in Ansbach and Würzburg in Germany had contacts with suspected Daesh [the Arabic acronym for the terrorist "ISIS" group] members in Saudi Arabia, German newspaper Der Spiegel learned. Chat transcripts suggested one of the perpetrators may have been planning to strike again. 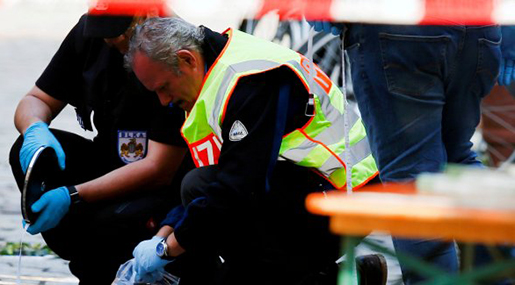 Transcripts of chats obtained by German authorities indicated that the two men involved in attacks in the German cities of Ansbach and Würzburg had repeated contact with suspected members of Daesh via telephone numbers registered in Saudi Arabia, among other places.

Würzburg perpetrator Riaz Khan Ahmadzai, who is believed to have originated from Afghanistan and seriously injured several people on a regional train with an axe and knife on July 18, also left a goodbye message before engaging in the attack. "We'll see each other in paradise," he wrote.

In chats conducted prior to the attack, a Daesh contact man suggested to the 17-year-old that he drive a car into a mass of people.

In the case of the other attack in Ansbach, committed by Mohammed Daleel of Syria, the authorities believe the perpetrator's death on July 24 was likely an accident.

They think his intention had been to deposit a backpack carrying homemade explosives within a crowd at a music festival in the city before detonating it remotely.

Shortly before the attack, his chat contact had called on him to film the detonation and the ensuing inferno and to send the video to Daesh.

But it appears the explosive detonated prematurely, killing Daleel and injuring 15 others.

Meanwhile, there is discussion in the chats of Daleel perpetrating further attacks.