A new pre-recorded video showing one of the killers of a Normandy priest was released by Daesh [the Arabic acronym for the terrorist "ISIS" group] in an attempt to use the atrocity to attract volunteers for more attacks. 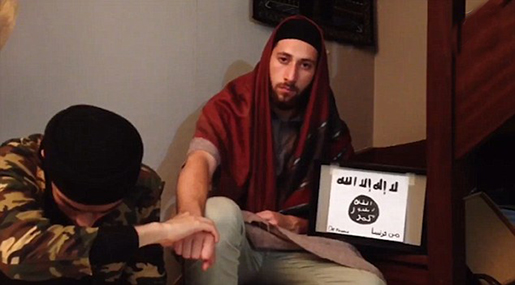 In the video, the recently identified attacker Abdel-Malik Nabir Petitjean is threatening President Francois Hollande and Prime Minister Manuel Valls, as well as the French people with more attacks against the country, according to Reuters.

The man, who was killed by police along with his accomplice Adel Kermiche after slitting the throat of an elderly priest in a church in St-Etienne-du-Rouvray near Rouen, is calling on Muslims to attack the countries fighting Daesh in Syria.

It is not known when the clip was recorded and it has not been immediately verified. It was published by AMAQ, the terrorist group's media arm.

While the media was quick to report on the chilling, but generic message of the Daesh supporter, many have been questioning the effectiveness of France's security system.

Kermiche, 19, had been monitored by the French authorities in the past, French prosecutor Francois Molins said.

The would-be attacker lived with his parents under curfew and with an electronic tag, which he had fitted after being released from prison.