Nationwide protests and strikes against the economic crisis in Zimbabwe have almost brought normal life in the African country to a halt. 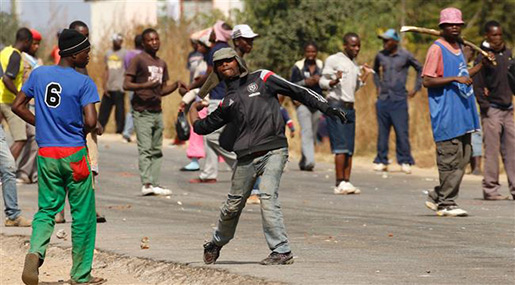 Zimbabwean riot police resorted to tear gas and warning shots to disperse small gatherings in the capital, Harare, on Wednesday, following weeks of unrest in the African country over the government's inability to pay the salaries of public sector employees.

The strike on Wednesday, called by a little known social movement called ThisFlag and dubbed the "stay-away day," was the latest of a series of strikes staged in the past couple of days.

"This is a sign of economic collapse, which has left people with nothing more to sacrifice and nothing to lose," said Dumisani Nkomo, a spokesman for the Crisis in Zimbabwe Coalition campaign group.

"We are heading toward a tipping point as a country, where citizens will express their pain by any means," he warned.

Inside the once bustling capital, people are seen camping outside banks hoping to withdraw their savings. In some suburbs of Harare, angry protesters set tires ablaze and blocked streets to stop vehicles from reaching the city center.

Meanwhile, police, too, have set up numerous roadblocks on the streets, purportedly forcing drivers to pay bribes, causing further anger against the government.

According to Dirk Frey, of the Occupy Africa Unity Square opposition movement, the protests were successful in forcing President Robert Mugabe to hear people.

"Despite sporadic incidences of violence, all over the country people have responded to the call. The state's crackdown in response, however, is of concern as it is a violent way of silencing people," he said.

On Tuesday, teachers, doctors and nurses began a strike over their unpaid salaries, leaving schools and hospitals crippled.

The opposition says the 92-year-old president has failed to properly address issues such as economic decline, mass unemployment and emigration in Zimbabwe while accusations have also been leveled about the repression of dissent and vote-rigging during his tenure.

Mugabe has ruled Zimbabwe since the nation's independence in 1980. He has promised that he will run again for presidency in 2018.