At least three civilians were martyred after Takfiri militants attack Eid al-Fitr prayers at a residential neighborhood in Syria's northern city of Aleppo. 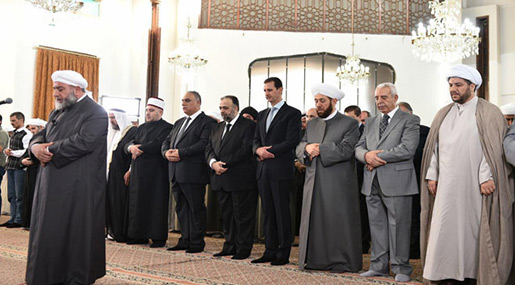 Sources said more than 30 others were injured when several mortars fired by the extremists struck the al-Mashhad neighborhood of the city on Wednesday.

The attack came as people gathered in the city located some 355 kilometers north of Damascus to say Eid al-Fitr prayers marking the end of the holy Muslim fasting month of Ramadan.

President Bashar al-Assad joined Eid al-Fitr prayers at a mosque in Syria's third city Homs outside the capital for the end-of-Ramadan holiday.

Large parts of Homs were once under the control of foreign-backed militants but since May 2014 they have been confined to a single neighborhood in the city's outskirts.

The al-Safa mosque, where al-Assad joined worshipers, is in Akrama which has been hit by repeated attacks by Daesh [Arabic acronym for "ISIS" l "ISIL"] and al-Qaeda-linked al-Nusra Front terrorists.