In defiance to international law, "Israeli" leaders approved plans to build some 800 settlement units for settlers in and around East al-Quds [Jerusalem], "Israeli" media reports said. 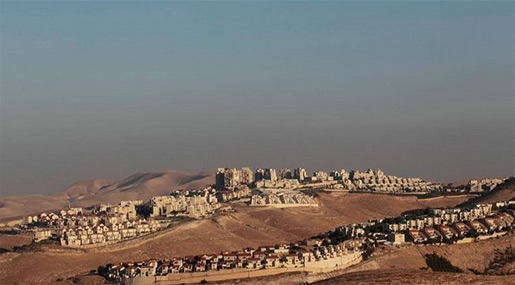 No formal announcement was made late on Sunday, but the "Israeli" daily Haaretz newspaper quoted an unidentified "Israeli" official as saying the plan was approved by "Israeli" Prime Minister Benjamin Netanyahu and War minister Avigdor Liberman.

According to the reports, 560 units will be built in Maale Adumim, a large settlement in the occupied West Bank near al-Quds.

Another 140 will go up in Ramot and about 100 in Har Homa and Pisgat Zeev - settlements on the outskirts of al-Quds that were built on land the "Israeli" entity occupied in a 1967 war.

On Saturday, Netanyahu also reopened a tender contract for the construction of 42 units in the Kiryat Arba settlement located in the southern West Bank city of al-Khalil [Hebron]. The project had been halted for a year and a half as contractors refrained from taking part.

Earlier on Sunday, the United Nations [UN]'s special coordinator for the Middle East peace process, Nickolay Mladenov, warned that the "two-state" solution to the "Israeli"-Palestinian crisis has faded away.

His remarks came after a report by the Middle East Quartet - which is mediating the so-called peace process in the "Israeli"-Palestinian conflict - that directly called on the apartheid Tel Aviv regime to put an end to its settlement expansion activities in the occupied Palestinian territories.

"Israeli" settlements on occupied Palestinian land is considered by most countries and the UN to be illegal and are subject to the Geneva Conventions, which forbid construction on occupied lands.

More than half a million "Israelis" live in over 230 illegal settlements built since the 1967 "Israeli" occupation of the Palestinian territories of the West Bank and East al-Quds.