Hizbullah Secretary General His Eminence Sayyed Hassan Nasrallah highlighted the importance of the Palestinian cause, on top of which is al-Quds. 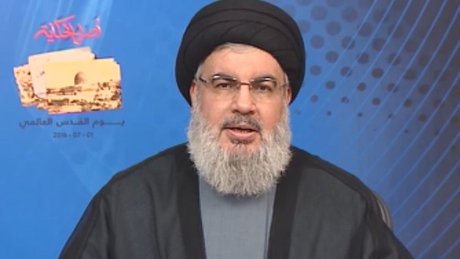 In a televised speech he delivered on al-Quds International Day, Sayyed Nasrallah affirmed that the late Imam Khomeini had announced al-Quds Day on the last Friday of the Month of Ramadan so that Muslims remember that al-Quds is part of their religious duties.

According to his Eminence, "Any person cannot claim to be a true believer in God while turning a blind eye to a Zionist entity that is aggrieving the Palestinian."

On the occasion, he highlighted that "al-Quds Day is marked for highlighting this great tragedy and cause. It is a day to draw a roadmap and announced responsibilities, away from political and diplomatic courtesies."

As the Resistance Leader reiterated Hizbullah's stance in support of the Palestinian cause, His Eminence stressed: "The right thing that should be said on this day is that Palestine, from the sea to the river, is an occupied and usurped land that was stolen from its legitimate people."

Sayyed Nasrallah further reminded: ""Israel" is a usurper and occupier entity and it was created through terrorism."

However, His Eminence confirmed that "in the worst circumstances, weakness might justify not going to war but it does not justify surrendering to the enemy."

"Weakness does not justify handing the land to the enemy, normalizing ties, establishing relations or conspiring with this enemy against the aggrieved ones," he added.

In addition, His Eminence elaborated "When the resistance axis started achieving victories in this cause on the regional level, other factors were imposed to obstruct its advance using false titles like sectarianism and freedom."

"The region witnessed a transformation in the past two decades through the rise of the axis of the resistance that includes Iran and Syria and the choice of resistance started making real achievements in Lebanon and Palestine."

In addition, His Eminence slammed the fact that "as the resistance axis reached the peak, some countries intervened forcefully to besiege this axis."

"They took the entire region to war and strife under false slogans, on top of which were freedom and democracy," he explained and pointed out that "the real aim was to strike the resistance movements and the peoples' resistance culture."

Sayyed Nasrallah went on to say: "The same ruling regimes and dynasties that allowed the US and Britain to create the "Israel" in return for getting their thrones are still fighting any chance for resistance."

In this context, he mentioned the incidents that happened in Egypt in the past and are currently taking place in Syria and Iraq. "They are trying to keep their thrones and history is repeating itself."

According to the Resistance Leader, "it is not a coincidence that those who are marking al-Quds International Day in Yemen, Bahrain, Syria and Nigeria are suffering the same stabs in the back from the Saudi regime."

"My message today is that all the tools and servants of must despair over the possibility of abandoning Palestine," he said.

Commenting on the recent "Israeli" threats about destroying the Lebanese resistance, His Eminence assured that "there is nothing new in these threats, as the two are always engaged in an open war."

To the "Israelis", Hizbullah Secretary General sent a clear message: "There is nothing new in your threats. One thing that is new is that you are talking a lot. You said you will destroy but before you destroyed ... It is known that you destroy and kill."

He also warned the "Israeli" apartheid entity and its settlers that they should be scared of the huge amount of information Hizbullah has accumulated on it.

"What is important is not what you know about us, but what we, the resistance, know about you. It's the first time in history where we have been able to accumulate this huge quantity of information about you."

Meanwhile, Sayyed Nasrallah undermined the "Israeli" officials' threats raised during Herzliya conference. "What is new is at the conference is the acknowledgement of this force that is threatening you and that force is Hizbullah," he viewed.

His Eminence, on this level, denounced the participation of some Arabs in Herzliya conference knowing that it discusses the so-called "Israeli" "national" security and strategic environment.

"Unlike the situation 2011, when "Israel" was in a critical situation, today the apartheid entity enjoys new opportunities especially in Syria. This comes as some Arabs claim to be part of the anti-terrorism efforts while they aid al-Nusra with arms and goods."

On another level, Sayyed Nasrallah asked why the terrorist group- Daesh- targeted Istanbul airport with the knowledge that Turkey did not attack the opposition in Syria.

"Turkey did not fight the terrorists and did not open a battle against them but adopted them politically, fought the Syrian regime, and opened its borders to insurgents and handed them with arms, ammunition and money," he added.

Moving to the Lebanese front, Sayyed Nasrallah stressed that the eight suicide bombers who blew themselves up in the northeastern border town of al-Qaa intentionally targeted the town.

"Suicide attacks in al-Qaa reflect Daesh's ideology i.e. based on murder and atonement similar to that of Wahhabism," he added, unveiling that "this is the ideology of ISIS, which is the same ideology of al-Nusra and al-Qaeda, which all are originated from Wahhabism in Saudi Arabia."

For those who claim that these attacks are a response to the resistance's intervention in Syria, Sayyed Nasrallah asked: "Why did the "revolts" do this attack in al-Qaa... The Christian village which has a municipality that doesn't politically support Hizbullah?"

"Not for Hizbullah's pre-emptive war in Syria and the efforts of the Lebanese army and security services, Daesh suicide bombers would have attacked all of Lebanon," His Eminence underscored.

In response, His Eminence called on the Lebanese and the people of the region to put their trust in the capabilities of the Lebanese security forces in maintaining security in the country, saying there is no need for fear and worry.

Sayyed Nasrallah also stated: "A breach occurred in al-Qaa but nothing can be 100% guaranteed," urging the Lebanese to look at what happened in Turkey, France, Belgium, the US and Russia.

His Eminence went on to say: "If Hizbullah and the Lebanese army's pre-emptive war was completed along the border, al-Qaa attacks wouldn't have happened. Everyone knows the political situation in Lebanon and how things are being run"

"If it wasn't for this pre-emptive war, you would witness eight suicide bombers coming across the border every day. You will see tens of car bombings hitting Lebanese towns," he warned.

He further added: "Through the ongoing security investigations, I believe that some people will know the identity of the handler who sent the suicide bombers to al-Qaa."

"All indications suggest that the suicide bombers did not come from the refugee camps surrounding al-Qaa but rather from the posts of Daesh but in the outskirts of Arsal," he unveiled.

On the same level, Sayyed Nasrallah called for an "official, national anti-terror strategy," assuring Hizbullah will not allow Daesh to "displace the residents of al-Qaa."

"Al-Qaa is like Hermel and all of Bekaa's residents are our people. We are neighbors and we won't allow that al-Qaa's residents be displaced. We will protect you 'with our eyes' and this is a national, ethical, human and religious commitment," he pledged.